A Bunch Of Dicks

Today's first selection is a song named after a corrupt US President sung by a group named after a criminal gang. In the second selection, Dick Gaughan relates a tale of incompetent and catastrophic leadership. The title of the third selection sort of speaks for itself.

Today's post is dedicated to the UK Government. Yes indeed!

The Dick Aven track is on his album "It All Started In The Garden" which came out just over 12 months ago. You can nab a copy at his Bandcamp page, together with his brand new album "Spin So Long".

And now, some more Dicks.

At the risk of stealing Charity Chic's schtick - try saying that without your teeth in - here is another of the 50p CDs I picked up in my local second-hand record shop the other week.

"Ghetto Style" is a 1990s compilation of early Gil Scott-Heron material which includes pretty much all of his second and third albums, "Pieces Of A Man" (1971) and "Free Will" (1972). I already have "Pieces Of A Man" - a truly exceptional record - but it was well worth the 50p to get "Free Will". Here are a couple of tracks from that.

"Did You Hear What They Said?" - Gil Scott-Heron

My local second-hand record shop had one of its occasional 10 CDs for £5 offers going when I popped in  last week, so obviously I came away with 10 CDs. A fair few of them were by acts I had never heard of but you have to take a punt at that price.

One of the unknowns were an outfit called Dub Narcotic Sound System whose 1995 EP "Industrial Breakdown" was nestling in a corner of the cardboard box. Some cursory research revealed that the Dubs (or the Narrotics?) were led by Calvin Johnson, former head honcho of Beat Happening. Here is one from each of his ensembles.

It transpires that Calvin was also involved in a band called The Go Team, but not this one (they didn't have the all-important "!").

It's Off To Work We Go

Today we have songs from four men each named after one of the Seven Dwarfs. Apologies to Grumpy, Sneezy and Dopey for not giving you each a song of your own, but I have spoken to Zoot and they assure me you are the three fellows they are singing about. That sounds a bit unlikely in Grumpy's case to be honest, but let's not get into that.

One of my favourite record labels is Turkofon, a German based label dedicated to reissuing vintage Turkish psych, prog and pop albums, mostly from the 1970s. Their Bandcamp site is an absolute treasure trove, and as if the quality wasn't enough to recommend them most of the albums are available to download for £3-4.

One of the shiniest jewels in their heavily bejeweled crown is "Nedir Ne Degildir?", the 1976 album by Edip Akbayram & Dostlar. Blast your ears off to these two tracks, then when you have reattached them go off and buy the album. And then lots of other albums as well.

From Edip to Edison. This is what appears alphabetically on my iTunes after "Mehmet Emmi". Apparently its now causing a sensation on TikTok. I don't know what that means.

From Townes To Townes

According to my extensive records I've never featured Townes Van Zandt on here up to now. I'm not sure why - certainly not lack of appreciation, maybe I just thought other people had it covered. That Charity Chic is guaranteed to play him at least once a year, for example.

I really ought to put it right, especially seeing as I managed to pick up a 4 CD box set comprising his first seven LPs and highlights from "Live at the Old Quarter, Houston, Texas" for a mere £5 last year in a large barn near Preston that was full of bits and bobs.

You'll all be familiar with the "hits", so here are couple of lesser known gems - one each from his 1972 albums "High, Low And In Between" and "The Late Great Townes Van Zandt".

"You Are Not Needed Now" - Townes Van Zandt

And here he is with a few of his fans.

All Downhill From Here

Over the next few years you may find that I am frequently surly and uncommunicative. If that happens it will be your fault because you just don't understand and it's not fair.

Until then, though, let's make a noise!

"We Teenagers Know What We Want" - Amos Milburn

A Yellow Kind Of Fellow

The mighty King Yellowman celebrates his 66th birthday tomorrow. Only 600 more years to go until the Birthday of the Beast. Also celebrating his birthday this week is the equally great Johnny Clarke, who turned 67 on Wednesday just gone. To mark the occasions here's one track each from His Yellowness and Clarky.

I should clarify for the benefit of any confused readers from Northern Ireland that we are talking about this Yellowman...

and not the sweet treat you can get at the Lammas Fair in Ballycastle.

Posted by Ernie Goggins at 07:20 No comments:

The mention of Colosseum in Monday's post prompted me to dig out my albums by their fellow titans of the late 60s - early 70s prog/jazz/blues scene, If.

Here is one track apiece from their first two albums, the imaginatively titled "If" and "If 2". You'll never guess what their next two albums were called.

"Raise The Level Of Your Conscious Mind" - If

"Your City Is Falling" - If

If were very popular when they first burst onto the scene, but over time their fans began to lose interest in them.  Like that Roger Whittaker, for example.

PS Yesterday I received a request from a Portuguese goat herder of our acquaintance to give you some "Gentle Giant play the songs of Jimmy Shand". I'm unable to oblige, unfortunately, but it gives me an excuse to share the greatest mash-up known to man. Jimmy, Fiddy, take it away!
Posted by Ernie Goggins at 07:15 6 comments:

We start the week with a new music alert. Long-standing readers may recall me raving about an outfit called Bandius Companion a couple of years back. Well, the gang is back with a new EP that came out just before Xmas, "21 Know As The Shape Of Accordion".

I am not quite sure how to describe their unique style - possibly Ennio Morricone goes prog? My particular favourite track on the new EP is "Until The Sand Comes To Eyes", which sounds like Colosseum if you replaced the singer with an accordion player.

The Bandius Brothers don't yet have any promos of the new record for me to share, but I recommend you head over to their Bandcamp page and check it out.

I tried to think of something suitable to pair Bandius Companion with and eventually settled on one of the landmarks of Brazilian psychedelia, "Paêbirú", the 1975 album by Lula Côrtes and Zé Ramalho. Here goes.

To round things off, here is a clip of Colosseum back before they added the accordion player.

Before we start, a quick service announcement. Microsoft Edge and/or Box.com are playing silly buggers, with the former blocking any attempt to download files from the latter. There doesn't seem to be a problem with other browsers, and I don't know whether it is just me or a more general problem, but hopefully normal service will resume soon.

Now back to our scheduled programming. Have you noticed how many 'proper' soul singers seem to be able to defy the laws of tide and time and keep getting better with age? William Bell and Mavis Staples are a couple of examples, as is the great Bettye Lavette.

Bettye was already in her mid 50s when she started her comeback with her 2003 album "A Woman Like Me". Nearly 20 years later she is still going strong and she will celebrate her 76th birthday at the end of the month. Today's tracks come from 2015's "Worthy". Bettye is; we are not.

I went to my first gig of the year last night - Ebony Steel Band play Kraftwerk, since you ask. 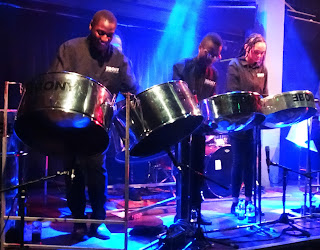 The band, who are multiple winners of the steel band competition at the Notting Hill Carnival, were belatedly promoting their album "Pan Machine". The album was released in 2019 and came about after the band were pestered into covering Kraftwerk by some intolerable hipster or other. It is available from all the usual outlets.

My colleague Mr F and I weren't quite sure what to expect, and were a bit worried it might be a novelty that wore off after the first couple of tunes. I am pleased to report we were wrong. The band were excellent, and not being a Kraftwerk buff I did not recognise most of the songs so was able to enjoy them on their own considerable merits.

Here is a track from "Pan Machine", followed by a history lesson on the origins of pan music from the great Lord Kitchener.

There are many other weird and wonderful steel band cover versions out there in YouTubeLand. Like this one for example.

We're back to pay our respects to some more musicians whose deaths last year perhaps did not attract the attention they deserved.

Today's tributes include: one of my favourite soul singers, Joe Simon; the lead singer of post-punk pioneers Delta 5, Julz Sale; Sonny Osborne of the Osborne Brothers; the great Michael Chapman and far too many more. We miss them all.

"If You Love Me (Let Me Know)" - Yvonne Sterling

"That Time Of Night" - Michael Chapman

"The Black Sheep Returned To The Fold" - The Osborne Brothers

We start this year by paying our respects to just some of the far too many musicians who left us last year.
Some of them we paid tribute to at the time of their passing -  Bunny Wailer, U-Roy, Lee "Scratch" Perry, Nanci Griffith and Don Everly among others - so we won't do so again now. Instead, today and tomorrow we'll mark the contribution of some whose deaths perhaps have slipped under the radar a bit.
Today's selection features mainly African musicians - one apiece from Ethiopia, Nigeria and Lesotho and two from South Africa. The only non-African among today's artistes is the one proclaiming his love for African music, Jacob Desvarieux from Guadeloupe.
"Tashamanaletch" - Alemayehu Eshete
"You're My Fire Extinguisher" - Sir Victor Uwaifo
"Nonyana" - Tsepo Tshola
"Batsumi" - Jonas Gwangwa
"Dinyatsi" - Steve Kekana
"African Music" - Jacob Desvarieux
We'll be back tomorrow with six more audio clips. Until then, here are a few more of the folks we lost last year.
Posted by Ernie Goggins at 07:20 No comments: