I'm off on my summer holidays tomorrow (Armenia, since you ask). As has become traditional on these occasions, here is a selection of tracks we featured in the very early days of the blog, back when we had about as many visitors as an Azeri disco in Yerevan. Hope you like at least some of them.

"Nothing But A Miracle" - Diane Birch

Do you ever get one of those days when none of the 22,053 songs on your iPad quite fits your mood? On those occasions I go to eMusic, click "New This Month" followed by "International" then have a stroll round to see what I can find.

That is what I did today, except I eliminated the strolling round bit - I just closed my eyes and dabbed. The result is today's selection. I have not listened to these tracks. They could be great, they could be awful. I am relying on you to tell me.

The band is called Makina Kandela, and they appear to be from Chile. The tracks are taken from an album of the same name released in 2012. Let me know what you think.

With the same spirit of adventure, for today's clip I went to YouTube and typed in "Top of the Pops 1975". This came up first - Fantastico!!!

All Kinds Of Everything

Everything. It's all I've got, folks.

"I Can Only Give You Everything" - Them

"I'll Be Your Everything" - George Soule

On Friday we went down to the Brixton Academy to see a Bunny Wailer and Beres Hammond double header. Beres was good, but Bunny was great - although admittedly I may be a bit biased as he has been a hero of mine for over 30 years. 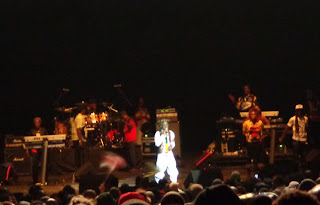 If the show was good, the organisation was pretty dire. Doors opened over an hour late and we had to queue for nearly another hour to get in. On the plus side, I got to spend quality time with some friends that I don't see often enough. And I bought a CD off an enterprising fellow who walked the length of the queue selling the works of the niftily named Yeshuah The 1st Mighty Nubian (whether it was Yeshuah himself doing the sales I don't know).

Yeshuah describes his music as "conscious hip-hop". I am not a hip-hop buff but this is not bad, as you can tell from the sample below. If you like it and want more your best bet is probably to contact him directly on yeshuahankh@hotmail.com. Tell him Ernie sent you.

"Who Feels It" - Bunny Wailer

The only real disappointment of the evening was that we didn't manage to meet up with my sister-in-law Pam (of True Identity fame) who was in the VIP lounge hob-nobbing with the likes of this lady.

Posted by Ernie Goggins at 18:34 No comments:

Our old friend Eddy Kenzo, the Prince of Ugandan Pop, released a new video yesterday. Glance down a little and there it is.

Before you watch it, here are a couple of tracks from Eddy's fellow Ugandan popster David Lutalo. Both come from his 2014 album "Far Away". The first is decidedly Kenzo-esque, while the second features the distinctive stylings of Sizo Lam (you know, Sizo Lam).

A couple of fine chugging tunes from 1970s Zimbabwe courtesy of the delightfully - and suitably for a Sunday - named Hallelujah Chicken Run Band.

When I was in Rome a couple of weeks ago I was rather taken with the delightfully scatty receptionist at the hotel. The feeling appeared to be mutual, as when I left she clasped my hand, looked deep into my eyes and said in a sultry voice, "You are a beautiful chicken".

I suspect something may have got lost in translation but it was clearly heartfelt. So today's clip is a tribute to the lovely Anna at the Hotel Domus Tiberina. The oldies among you will recognise the tune. 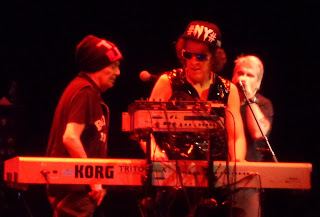 This episode of Single Song Sunday features the classic "Funny How Time Slips Away", a song so good that - judging by the versions I have heard - nobody apart from Mel Gibson has been able to bugger it up completely (although I am happy to be corrected).

Written by Willie Nelson, it was first recorded by Billy Walker in 1961 and was a mid-ranking country hit for him. The first version to hit the pop charts was by Jimmy Elledge later that year, while Willie himself only got round to releasing it in 1962. Over the next 15-20 years anyone who was anyone had a go at it, as did a fair number of people who weren't anyone at all.

Here is a small selection. I can particularly recommend the Dorothy Moore version - possibly my favourite if I had to choose - Junior Parker's blues workout, and Lea Laven's seminal Finnish rendition from 1976. There seems to be a surprisingly small number of reggae versions, so Dobby Dobson fills the mandatory slot mainly due to lack if competition rather than the intrinsic merits of his effort.

As the hot weather continues, so does the hot weather music - who knows when we will get another chance? We have some soca this time. This is for my colleague Nicole or, more accurately, for Nicole's Dad.

This is also an opportunity to pay tribute to Val Doonican, who sadly died today. He was a great family favourite when I was little. While of little consolation, at least now he's in Heaven he will finally get to find out whether he won that bet about the angel with the whiskers on.