A Pig Of Many Parts

I felt compelled to do this post from the moment the iPOd shuffle dealt out the first two tracks one after another this morning. So - with any necessary apologies to our vegetarian, Jewish and Muslim readers - here is my tribute to that most versatile of beasts, the humble pig.

Zouk is a style of music popular in the French-speaking Caribbean: part island rhythm, part what the young people mistakenly think of as r 'n b, and part French soppiness. Here are a couple of examples from a compilation called "Jet Set du Zouk".

Here is some more French-infused pop.

A couple of weeks ago I finally got around to listening to a CD I picked up for next to nothing in a second hand record shop in Cape Town over Easter (this is quite quick for me). The CD in question is "Hypocrites Unite" by Danny de Wet & the Lowveld Garage Band, and on the back cover it is described as "a collection of gospel songs including five secular tracks".

I believe - but cannot swear to it - that this is the same Danny de Wet who, as a drummer, has been a stalwart of the South African rock scene for many years with the likes of eVoid, Petit Cheval and Wonderboom. If it is him, then he was already "veteran drummer" Danny de Wet by the time this CD came out in 1999. Today's selections are two of the "gospel" songs. Nibs van der Spuy helps out on guitar on "Jesus Is Guarding Me".

And here is Danny (or a Danny anyway) looking faintly ridiculous behind the drumkit for Petit Cheval way back when. No prizes for guessing the decade.

On Thursday, Mister F and I went to the 100 Club to see the mighty Jimmy LaFave live, something I have been wanting to do for many years but had never previously had the chance. Needless to say he was marvellous. 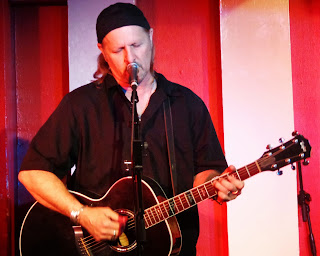 Inexplicably the 100 Club was barely half full. But hopefully Jimmy will remember the warmth of the welcome rather than the size of the crowd and be back before too long.

Mister F has expressed the view that Jimmy is even better live than on record. I think it is probably too close to call, so in a spirit of compromise (or indecison) I have picked some live recordings for you. In 1999 Jimmy released "Trail", a sort of official bootleg of live concert and radio recordings. He has recently followed it up with "Trail Two" and "Trail Three". Here is one from each.

They are all Dylan covers. He does a lot of them, and often better than Bob does.

"Love Minus Zero/ No Limit" - Jimmy LaFave (from "Trail Three")

I have a monthly account with eMusic and, when I get down to my last few downloads each month, usually take myself off to "New This Month - International - Least Popular" to see what I can find.

Sometimes you can understand why they are tucked away in one of the dustier corners of cyberspace. But not this month, because I came across the self-titled debut album by Os de Paula, three brothers from São Paulo. Very good it is too.

This smoothie, ladies and gentlemen, is their old dad, Netinho de Paula.

This Paula is no relation, as far as I know.

A Rare Attack Of Newness

I have had some cracking stuff sent to me recently, including some great re-releases from the ever-reliable Tompkins Square and VP/Greensleeves labels which I will get round to soon. But we'll start with some new records.

The first two acts have both been around for a while but for one reason or another I have never heard them before. The first, Joseph Arthur, has just never appeared on my radar. My loss. He has a new double album out now called "The Ballad of Boogie Christ". The man himself says it is "a psychedelic soul record about redemption and what happens when you find it and lose it". Now, I don't know about that, but I do know it is an excellent record that all right-minded people will enjoy. On this track you can play Spot the Mott.

By contrast, the second act is one I have been aware of through the blogosphere for some time but have consciously avoided. While their name does not offend me, yeah, as much as some others I could mention, I instinctively cringe at Someone Still Loves You Boris Yeltsin. Which is a shame, as judging by their new album "Fly By Wire" they are a pretty good band. With a very irritating name.

Next up we have The Halfways, known to their mums of Daniel Fernandez and Alejandro Facusse, who released their debut album "Exit" via Bandcamp earlier this year. Daniel is originally from Honduras, not that you would guess that from their music. Like a lot of bands that have popped up since the Fleet Foxes made it big, they are clearly influenced by the old Laurel Canyon sound. But rather than the pale imitators that many of them are, Daniel and Alejandro appear to be directly channeling Crosby, Stills & Nash.

"Down You Go/ The Queen" - The Halfways

Finally, the only one of the lot I already knew. You may remember me raving about "Acid Week" by John Cathal O'Brien a year or so back. John has been in touch to let us know that his new album, "Songs on Lafayette", is now available for free (!!!) on his Bandcamp site. He describes it as "even more lo-fi" than "Acid Week" - which takes some doing - but it is also n an even stronger set of songs that last time round. And at that price you would have to be made not to give it a listen.

John is originally from Dublin but is now living in the States. Here is another O'Brien who left her homeland to seek her fortune over there.

Ukraine In My Brain

I said to myself before tonight's football started that I would post one track from Ukraine or England for each goal the respective sides scored. It ended 0-0, which would have left us with nothing to do but ponder the purpose of Kyle Walker. So let's pretend it was 1-1.

I'm not going to tell you which is which though.

Things have been a bit shambolic around here lately, so we have got some miltary men in to instil some much needed order and discipline. We start with two for one.

And let us not forget all the other, less prominent, ranks. Like this one.

"Them A Weave" - Nardo Ranks

Like many music bloggers, I have a desperate need to feel loved. I check my numbers on Blogger and Hype Machine every day and feel full of self-worth when they have a surge.

Recently those b*gg*rs at Box have changed something or other with the result that my posts have stopped being picked up by Hype Machine. The number of hits has plummeted and I briefly thought of doing the same, before pulling myself together.

In an effort to remain positive I have told myself that this is in fact a good thing because I am now more exclusive. And in turn it means that you are more exclusive too. This is what I believe they call a win-win situation, so let's keep it that way for a little while (but only a very little while, please, Mr Box Helpline Man).

And what is it we tastemakers are grooving to at this particular point in the zeitgeist? Why, 1960s Greek pop, of course! Especially when it is as bonkers as "Hallo Beethoven".

Those of you who could hear that last one above the sound of you stroking your beard would have immediately identified it as a cover of this old standard.

Tsonga Disco Month is over. In case any of you are worried about suffering from cold turkey, we are going to wean you off it slowly with some more top-notch African pop.

While I was in Addis last year I picked up a copy of "Atasrejugne", an album by Aster Kebede that came out in 2010. It's great. Today's first pick is particularly groovy, and likely to get a spin down the Eleanor Arms if Frankie (a.k.a. The Minestrone of Sound) goes through with his misguided proposal that I do a guest "set" one night when nobody is in.

I know nothing else about Aster. There are a few home video quality clips of her newer recordings on YouTube, but whether she is a big star back in Ethiopia I couldn't tell you. If she isn't, she should be.

To the traditional unrelated 80s videoclip. Our old friend Charity Chic recently referred to Tsonga Month as a "labour of love". He was only half-right - there was no labour involved, just love - but he did prompt me to dig out this old hit by two brothers who, like Chic himself, are of the Scottish persuasion. I don't mean the Proclaimers, or the Jesus and Mary Chain, or the Longmuir brothers from the Bay City Rollers, or even Jimmy Shand and his less well-known brother, Hand. These ones.