We end the week with a rare good news story.

Regular readers may remember me enthusing about Thad Cockrell, most recently last year when his long overdue new album "If In Case You Feel The Same" was released. As I explained at the time, Thad was one of the artists left high, dry and out of pocket when Pledge Music collapsed, but despite having lost money himself honoured his commitments and sent all of us who had pledged a copy of the album.

By the time Thad was finally able to release the album the pandemic had arrived and he was unable to tour to promote it. So sustained was his run of bad luck that he contacted his management at the beginning of the month to tell them he was thinking of packing it in.

Fortunately, fate intervened. Jimmy Fallon, host of the Tonight Show, happened to hear one of the tracks from "If In Case You Feel The Same" playing in a store, fell for it and instructed his people to track Thad down. All of which led to Thad performing the song on the Tonight Show on Tuesday this week.

Since then, things have really taken off. The likes of Rolling Stone have picked up the story and the record is flying off the shelves. Hopefully it will encourage the new fans to check out his back catalogue too.

It is nice to see that, every now and then, good things still happen to good people. To celebrate, here are a couple of oldies followed by the Tonight Show performance.

"Are You Still Missing Me?" - Thad Cockrell

"Pride (Won't Get Us Where We're Going)" - Thad Cockrell

Today I had been planning to plug a new release, but the release date seems to have been delayed so I'll hold on to that for now. With a gap in the schedule and absolutely no idea how to fill it I turned to the "this day in history" page on Wikipedia in search of inspiration.

The first entry for 27 January reads "AD 98: Trajan succeeds his adoptive father Nerva as Roman Emperor". Now that sounds suspiciously precise for an event that took place over 1900 years ago, and they were also on a difficult calendar back then. But it serves its purpose.

Here are a couple of tracks from "Firm Roots", the 1969 album by Alan Trajan (no relation - his real name was Robertson and he hailed from Livingston).It is very much in the style or Procol Harum and Pete Brown, and not bad at all.

Other notable 27 January events include Dante Alighieri being exiled from Florence in 1302.

One of the great delights of recent years has been the emergence of a whole bunch of labels dedicating themselves to tracking down African music from the pre-Internet age - the likes of Strut, Soundways, Analog Africa, Obstinato, Now-Again and my old buddy Awesome Tapes From Africa, al of whom have had releases featured here.

To that number you can add Habibi Funk, a Berlin-based label which specializes in vintage funky sounds from the Middle East and North Africa. If you are not familiar with them, their compilation "Habibi Funk 007" is a great place to start.

One of the shiniest jewels in their crown is "Habibi Funk 013: The King of Sudanese Jazz", the King in question being a gent called Sharhabil Ahmed. Fortunately for us all, Sudanese Jazz bears no resemblance to 'normal' jazz. It is more like slightly wonky rock 'n roll.

There is something about the opening to "Argos Farfish" - particularly the squawking sax - that reminds me of this old favourite from Blurt. And they both have fish in the title!

Ten bonus points if you can tell me the link between that and this.

As an internationally renowned timewaster tastemaker I never regularly get asked what I think the next big thing will be, genre-wise. It's always hard to pick just one, but right now I would plump for Turkish blues-rap.

Is there even such a thing, I hear you ask. Why, of course there is. In fact earlier this week Denizli's very own Mechanical Rooster, one of the leaders of the scene, released their first single. You can hear it on the YouTube audio clip below, and download it from all the usual outlets.

This being Friday I thought we should give you a bonus to help see you through the weekend. Sticking with the mechanical theme, here are a couple of tracks from Mechanical Bride's 2011 album "Living With Ants".

I don't know much about her other than that her real name is Lauren Doss and she is still making music. This seems to be be her only album using the Mechanical Bride name. Very nice it is too.


We'll be back with more zeitgeist-busting sounds next week. Until then - more machines!
Posted by Ernie Goggins at 08:46 2 comments:

Today it is the turn of the mighty Leroy Smart. Both tracks come from his great 1981 album "Too Much Grudgefulness". And that is really all I have to say on the matter.

"Too Much Grudgefulness" - Leroy Smart

"This Love I Am Feeling" - Leroy Smart

Some smooth 70s soul sounds to start the week, courtesy of Roger "By Name..." Hatcher. He comes across very much as the sort of man who would ask a lady her star sign before seducing her.

Speaking of star(r) signs - we don't just throw this together, you know - here's a little something from Roger's better known cousin.

Today we have some Turner Cody for you. He normally gets bracketed with the Anti-Folk movement (or Antifo as they are presumably called by right-wing Americans), but he is distinctly country tinged.

If you are not familiar with his work I would recommend checking out his 2018 compilation album "The Great Shadow", on which you can find both of today's tracks. It is available on Bandcamp along with the rest of his extensive back catalogue.

"The Bright Side" - Turner Cody

Here are two more Turners for you to enjoy. The video features two of the worst haircuts you are ever likely to see.

Karol Duchoň was one of the biggest Slovak pop stars of the 1970s and early 1980s. He could really belt out a tune and was often referred to as "the Slovak Tom Jones". If you listen to the first of today's selections, his take on "Soul Man", you can see why.

Karol would no doubt have been a star for much longer if he had not sadly left us at the tender age of 35 due to his wild ways. As his shakily translated Wikipedia entry puts it "He lived fast, he didn't want to miss or experience anything. He was a heavy alcoholic and this was a sign of his early departure. He died on 5 November 1985 in Bratislava".

Here's Karol wowing local office workers with his funky backing band. I don't know their name but my guess would be the Beige Brothers. 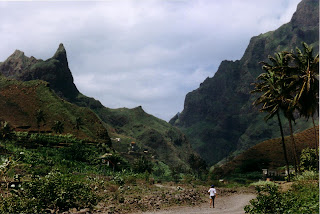 Posted by Ernie Goggins at 07:22 No comments:

She's Gone And Done It

Earlier in the week I received a confusing request for more "songs about sheese". I never did work out what that was about, but it prompted me to start listening to songs with titles that begin with "She's".

To my surprise and delight I discovered that I have five "She's Gone"'s in my collection. They are all different songs so don't qualify for Single Song Sunday, but in the spirit of Sundays there is a Mandatory Reggae Song.

Some slinky sounds from New Orleans for you today, from the utterly magnificent 1976 self-titled album by The Wild Tchoupitoulas (and not, as I believed for many years, The Wild Chipolatas).

The Wild Tchoupitoulas were members of one of the 'tribes' of Mardi Gras 'Indians' who take part in the Mardi Gras Carnival and various other parades, and a lot of the lyrics relate to those traditions. On the album they were backed by The Meters, which explains the funkiness.

"Big Chief Got A Golden Crown" - The Wild Tchoupitoulas

"Meet De Boys On The Battlefront" - The Wild Tchoupitoulas

The Sound of Swinging Yorkshire

Some wailing and wassailing courtesy of The Watersons

"I Went To Market" - The Watersons

And as a tribute to Gerry Marsden, who died over the weekend, here he is with his finest moment. RIP Mr Marsden.
Posted by Ernie Goggins at 07:34 1 comment:

This being my first post of 2021 I thought long and hard about the songs to share with you. I was after something that would sum up our hopes and fears for the year ahead and leave us feeling optimistic that it will be an improvement on the year just gone.

And then I thought "Sod it. Let's have a couple of songs that mention the Mad Hatter in the title". So here they are.