The Hits (And One Big Miss)

Staggering towards the end of the year, we find ourselves literally on our last Leggies. In no particular order, here are some new releases I enjoyed this year that you might want to check out (or not, as the mood takes you):

I have featured a number of them on here already, and the good folks at For The Sake Of The Song have already beaten me to it with one of the others. So here are some cracking tunes from a few of those that remain.

"Hotter Colder" - This Is The Kit

And with that, it is time for me to say goodbye until 2018 with the help of one of this year's most lamented - the great Glen Campbell. Adios.

Gigs of the Year

This will be the penultimate post of the year. The last one will include a handful of records that I particularly enjoyed this year but have not previously featured (though which ones, as of now I couldn't tell you). But to warm up for that, here are my top three gigs of the year.

Choosing them was even tougher than usual this year. Honourable mentions go to the likes of John Murry, James McMurtry, Girl Ray, the Spacebomb Revue, the Rainforest World Music Festival in Borneo and - less credibly - the great Gilbert O'Sullivan.

But after much consideration, the top three are: Garland Jeffreys at Nell's Jazz and Blues, Orchestre Poly-Rythmo de Cotonou at 229, and Margo Price at Islington Assembly Hall.

Here is a track and photo from each, finished off by a seasonal video from Gilbert and a friend.

"How The Mighty Have Fallen" - Margo Price 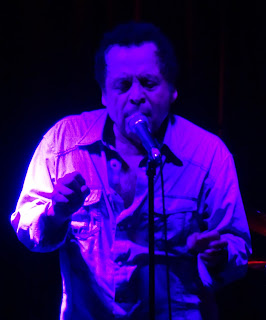 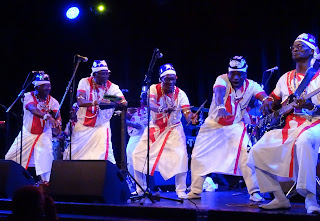 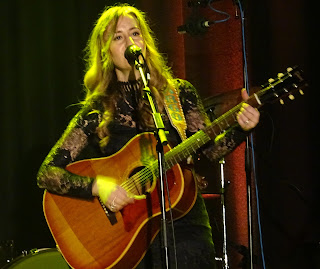 Christmas All Over The World

Warning: Not all of these Christmases are happy ones. Here's hoping yours are though. Ho ho ho to all our readers.

Some hypnotic Tuareg blues from Niger to get you into the mood for Christmas. You can almost hear those sleigh bells a-jingling. Both tracks from Toumast's 2006 LP "Ishumar".

Posted by Ernie Goggins at 10:04 No comments:

Ladies and Gentlemen, meet Elbert and Melvin. You may know Melvin's sister.

"This Is Elbert, Operator" - Pete Mario

Great excitement in the Goggins household this morning. I've just booked my tickets for the reunion of one of my all-time favourite bands, the mighty Microdisney. For two nights only - one in Dublin and one in London - the old gang is getting back together to perform "The Clock Comes Down The Stairs" LP. And, hopefully, all the hits.

Here are two from my long list of personal favourites. Neither of them are actually from "The Clock Comes Down The Stairs" but, hey, there's plenty of time for that.

Posted by Ernie Goggins at 10:02 No comments:

Let me share with you a long-buried memory. It was a Bonfire Night in the early 1990s - I can't remember exactly which year - and I was making my way to a fireworks display in Highbury with some pals when we got stopped by a couple of lads with a video-camera and microphone.

They explained that they were trying to get some "vox pop" to include in a tour video for a band called Red Aunts who were playing nearby that evening, and they had a very particular - and peculiar - request. They wanted me to claim that exposure to the music of Red Aunts had caused my genitalia to increase significantly in size.

Back then the Internet barely existed, which meant you didn't worry about doing things that might one day turn up on YouTube and embarrass you. So I agreed. I put on a silly posh voice, made the outrageous claim they had asked for, then went on my way and promptly forgot all about it.

That was until today, when I popped into our local charity shop and there was "Drag", the 1993 debut album by Red Aunts. I bought it, of course, then headed home to test out the theory. So far there is no evidence of any change in Little Ernie whatsoever, but maybe the effects aren't immediate.

"Teach Me To Kill" - Red Aunts

PS In researching this article, I discovered that I should have been worried about things turning up on YouTube to embarrass me in the future.
Posted by Ernie Goggins at 18:41 6 comments:

How can Derrick Morgan plausibly claim to be the ruler when it is obvious Cherry still rules his heart. He is fooling nobody but himself.

Posted by Ernie Goggins at 21:35 No comments:

This post is especially for my pal Mister F, who is a big Scott Walker fan - so much so that he even claims to like all that 'clink clank bang' stuff Mr Walker produces these days.

Back before he was the serious artist he is these days, even before he was rebranded Scott Walker, young Scotty Engel of Hamilton, Ohio released a few singles under his own name. Most of the ones I've heard were forgettable examples of the sort of sugary pop that was being churned out in the late 1950s. These are two of the better ones.

"Too Young To Know" - Scott Engel

They aren't anything special, to be honest, but I'd still rather listen to them than this:

Au revoir, French Elvis. Hope you made it to la Terre Promise.

"If I Were A Carpenter" - Johnny Hallyday & Emmylou Harris

Posted by Ernie Goggins at 22:09 No comments:

It has been about six months since our last Single Song Sunday. That was 'Then You Can Tell Him (or Her) Goodbye", and one of the star turns was the version by Barbara Lynn. Well, Babs is back, this time with her signature tune.

"You'll Lose A Good Thing" was written by Barbara herself, and she took it into the US top ten and to number one in the R 'n B chart in 1962. Over the next decade or so it was covered by almost every female soul singer you can think of, from Aretha on down. I have limited myself to just two of them, plus Little Royal as the token soul man.

The only other chart version that I'm aware of is Freddy Fender's, which topped the US country chart in 1976. Compare and contrast it with the more sombre interpretation by Germany's one-man super-group,  Dad Horse Experience, whose distinctive vocals suit the song surprisingly well. It's off his brand new album "I Am A Stranger Here Below", which I can heartily recommend.

And, finally, we have not one but two Mandatory Reggae Versions (and there are plenty more where they came from).

"If You Should Lose Me (You'll Lose A Good Thing)" - Yellowman

We welcome December in the old traditional way, with some Dutch blues-rock from the late 1960s. It comes courtesy of Cuby + Blizzards. Cuby's real name was Harry Muskee, but Harry + Blizzards doesn't have quite the same ring to it I suppose.

On "Appleknockers Flophouse" Harry's vocals remind me very much of Tim Rose, who was also known for his apple-related tunes. I've added one for the purpose of comparison.

While we are on the subject of apples...