I'm off on my travels again, get back in about ten days. To keep you company until I return, here are five tracks each of which are exactly three minutes long (if my mp3 player is telling the truth).

As well as being three minute heroes in their own right, collectively they are getting a well-deserved fifteen minutes of fame. Also you can use one of more of them when next boiling an egg - from very runny to rock hard, according to your taste.

Have fun, see you soon.

"The Man Who Invented Himself" - Robyn Hitchcock

An unscheduled extra post today - and one I wish wasn't needed - to pay my respects to David Olney, who died on stage at the weekend.

I was lucky enough to see Mr Olney perform once, and it was a very memorable gig. It was back in the early 2000s at the Borderline in London (also now sadly deceased). The show had not been very well advertised, and at the start of the evening there was no more than 15 people in the audience.

It transpired that most of them were friends and family of the support act, who were launching an EP, and they all left once their buddies had finished their set. By the time Big Dave hit the stage there were just three of us left, me and my pal Mister F and some bloke at the other end of the bar. But if he was disappointed he didn't let it show, playing a full set and stopping for a beer and a chat when he finished. A great performer and a top man.

Here are some songs to mark his passing. The first is particularly apt. RIP Mr Olney.

"If It Wasn't For The Wind" - David Olney

As I've mentioned before, one of the perks of doing this blog is that lots of nice people send me groovy music for free. In recent weeks none of them have been nicer or groovier than Bandius Companion.

Based in Barcelona, the band claim to be "inspired by the soundtracks of Italian detective stories of the 1970s". I know what you're thinking: "Isn't everyone these days?". That's true, but this bunch stand out even in that very crowded field.

Their most recent album, "Preguntes Fractales", was released late last year. You can buy it for as little as €5 on Bandcamp, and if that isn't enough of a bargain then for another €10 you can get their entire back catalogue as well.

Here are a couple of tracks from the album to whet your appetite. The Spaghetti Western influence is noticeable on "So Far, The Desert", "The Boa Azul Great Escape" has more of a jazzy prog feel (in a good way).

As a bonus, I have bunged in a song from 50 years ago which I think makes a similar noise. It will be familiar to those of you of a certain age who own a copy of the Island Records' "Bumpers" sampler.

"Take Me To Your Leader" - Clouds

Let's Go To The Hop

Here are some tunes sure to put a smile on your Saturday. They can all be found on a compilation called "Country Hop 1959-1963". It's possible you may recognise the third song.

"You Can't Pick A Winner Every Time" - Bobby Nelson

That is one of many country versions of Beatles songs out there, but it wasn't just a one way street.

Gigs: From A to B

Yesterday was a good day for gigs. First I booked my tickets to see the mighty Abyssinians when they tour the UK later in the year. And then I met up with some old pals for my first live show of the decade, Baloji with L'Orchestre de la Katuba, who took a little while to get into their stride but when they did they were very good indeed. Here's one from each of them. 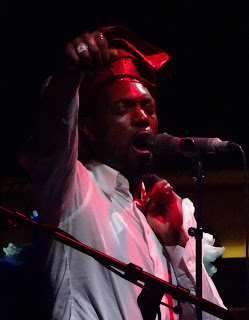 I couldn't find any videos of peculiar numbers, but I found one that is both magic and odd. I think that's close enough.

Posted by Ernie Goggins at 15:42 No comments:

Later in the day than originally planned - pesky real life intruded - we bring you the first Single Song Sunday of 2020. To ease us into the year we've chosen something suitably mellow, the old blues/jazz standard "Since I Fell For You".

Written by Buddy Johnson, we kick things off with his original version from 1947 (that's his sister Ella on vocals), and follow it with the most commercially successful recording. Lennie Welch took it to Number 4 in the US charts in 1963.

As you might imagine, just about every female jazz and soul singer of the 1950s and 1960s working between 1947 and the mid 1970s had a crack at the song. Dinah Washington's may be the pick of the jazz versions; Laura Lee's is definitely the pick of the soul ones (and may be my favourite of all).

Most of the other names should be familiar to you, with two possible exceptions. One is Furgone di Piufiglio, the Italian soul sensation who recorded this version live in 1973, the other is Claudia Schmidt. She can explain better that I can who she is, but I saw her perform the song at the Cambridge Folk Festival back in the early 1980s and was mightily impressed.

With a degree of inevitability, the Mandatory Reggae Version comes from John Holt, very much the MVP of the MRVs.

"Since I Fell For You" - Buddy Johnson & His Orchestra

"Since I Fell For You" - Lenny Welch

"Since I Fell For You" - Dinah Washington

"Since I Fell For You" - Charlie Rich

"Since I Fell For You" - The Sonics

"Since I Fell For You" - Wilbert Harrison

"Since I Fell For You" - Claudia Schmidt

"Since I Fell For You" - John Holt

PS One of those names is a pseudonym for a well-known artist who has people who clamp down on this sort of thing. When you work out who it is, keep it to yourself.

Imagine, if you will, someone introducing a piece of music to you with the words "This is full blast psychedelic Latin Cumbia Garage with a very cheesy touch of a 70s supermarket!". You might be inclined to dismiss them as excitable, pretentious or both. And you would usually be right.

Yet when used by a record company to describe "Bailazo", the 2015 album by Rolando Bruno, they are pretty much spot on. As they are for his 2019 album "El Mundo Está Cumbiando". Rolando himself calls it "Cumbia Trash". And that is good enough for me.

Here is a track from each of those albums. You can get them both on Bandcamp if you click on the titles. I think you should.

As long-standing readers may recall, there was a time when this blog had a mission - to bring Tsonga Disco to the masses. Discovering the delights of this pop music from north-east South Africa and southern Mozambique (the home of the Tsonga or Shangaan people) was what motivated me to start the blog in the first place.

That was 11 years ago and the mission has long since been abandoned, I'm ashamed to say. Not because of any reduced enthusiasm on my part, but because my sources of new Tsonga Disco have largely dried up. It is still the most popular stuff on the blog though, and every few months I'll get an email from an enthusiastic DJ - usually from the US or the Netherlands for some reason - asking for my help in tracking down more of it.

That happened again at the weekend and it got me thinking. I may not have acquired any new LPs for two or three years, but there are many tracks on the LPs I have got that haven't featured here yet. So my New Year's resolution is to get back into the old Tsonga swing of things, and to post a couple of tracks at least once a month.

We kick things off with a couple of folks who have each only featured here once before and for whom a follow up is long overdue.

Posted by Ernie Goggins at 09:39 No comments:

A couple of months ago The Ubiquitous George tipped me off to a new compilation called "Alefa Madagascar! Salegy, Soukous & Soul from The Red Island 1974-1984". I have finally got round to listening to it, and it is as wonderful as he claims.

The album was compiled by the always excellent Strut Records and you can get the whole thing on  Bandcamp for as little as €8, which is a bargain in anybody's money. Here are a couple of tiny tasters. The Papa James track may be my new all time favourite thing.

Little known fact - Freddy Cannon's hit was originally called "Malagasy Lassie" but the powers that be at Swan Records changed it to make it more palatable for American audiences. It worked commercially, but at what cultural cost?

Well here we are folks. The start of another year, and another decade. I don't know whether you are optimistic or pessimistic about what is to come, but King Floyd helpfully has both options covered.

Posted by Ernie Goggins at 10:22 No comments: