I found out today that Maggie Roche sadly died last month. As a belated tribute, here are a few of her finest moments.

Mister F and I were back at The Garage last night, a couple of weeks after the James McMurtry show. No free beer from the support act this time, but that is only a minor quibble when you have the ever excellent Chuck Prophet headlining. 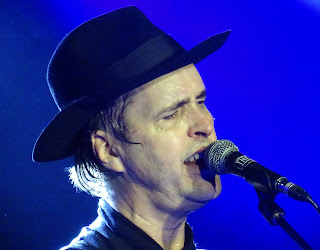 Chuck and The Mission Express played a lot of stuff from their new album "Bobby Fuller Died For Your Sins". I have not had a chance to listen to it yet, but judging by last night's performance it is well up to their recent high standards, and sounds decidedly rocking. Here, by contrast, are a couple of mellower numbers from much earlier in Chuck's career.

And, of course, they did this one, as they always do. Fortunately.

It's Friday. It's Fabulous. Who beter to take us in the weekend than the Fabulous McClevertys?

"Don't Blame It On Elvis" - The Fabulous McClevertys

And here is Elvis, behaving blamelessly.

So we have gone for "Let It Be Me", or "Je t'appartiens" as it was called when Gilbert Becaud wrote and recorded in back in 1955. The first English version was recorded in 1957, but it took the Everly Brothers in 1960 to popularise the song in the US and the rest of the English speaking world. Four years later, Jerry Butler and Betty Everett had an even bigger hit with it, at least in the US.

Since then the world and his wife have had a go. Versions that did not make the cut include Elvis, Willie Nelson and Nina Simone, among many many others. But we do have Bob Dylan, from his experimental "let's try to sing properly" period. We also have the marginally less well known Doreen Shaffer, helping out on the Mandatory Reggae Version. And we have possibly the finest Czech version you will ever hear.

"Let It Be Me" - The Everly Brothers

"Let It Be Me" - Betty Everett & Jerry Butler

"Let It Be Me" - Johnny Clarke & Doreen Shaffer

For such a frequently recorded song, there are remarkably few live performances on YouTube. But I did come across this little treat.

On Wednesday, Mister F and I greatly enjoyed seeing the mighty James McMurtry, who is in the UK for the first time in quite a few years. I think the last time he was over may have been the tour that got captured on his "Live in Europe" album - listen carefully, and you can hear the two of us screaming girlishly in excitement on some of the tracks. 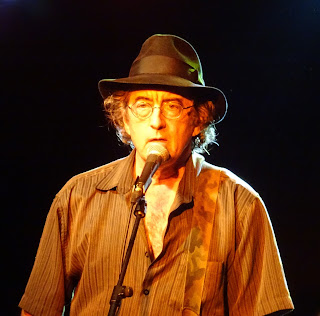 Mr McMurtry is at his best when singing his first person short stories about everyday life and losers in the middle of America. Here are three of my favourites. He played the first two the other night, but not "We Can't Make It Here" - maybe he feels the narrator of that particular song sounds a little too Trumpian these days.

While we are here, I should pay due tribute to the support band, Alice Drinks The Kool Aid. Musically they were perfectly fine, if not really my cup of tea. I mention them because the singer runs the Lagunitas Brewing Company in Chicago, and he brought along a consignment of beer for us to sample. Very nice it was too - it certainly showed the local hipster effort to be the pale ale imitation that it is - but best of all it was free. So for that reason, I am voting them the best support band ever!

The other day I was strolling down my street when I spied an abandoned mud-caked CD lying on the pavement. Being a kind-hearted soul, I picked it up and took it home to get dried out and cleaned up.

It turned out to be the album "Don't Forget" by Italian jazz dude Tommaso Starace and his Quartet. It's probably perfectly OK if you like that sort of thing, but I have an allergic reaction to jazz. This track is the only one I was able to get through to the end of.

Fortunately, salvation was at hand in the form of the very next track listed on my iTunes. Let us all be thankful for the divine Ms Tommie Young - she came just in time.

And here is another Tommy to round things off.

Some good old-fashioned toasting, courtesy of Trinity. Both tracks from his 1977 LP "Three Piece Suit". When you listen to the Sandra song, the reason for today's clip will become obvious.

Posted by Ernie Goggins at 22:12 No comments: