Nagisa Ni Te are a Japanese duo whose music is variously described as folk-rock, psychedelic and progressive. They have been knocking around for the best part of a quarter of a century but, to my great shame, had completely passed me by until a couple of months ago when I read a review of one of their albums and I decided to explore. Better late than never

A number of their albums were released on the Jagjaguwar label and you can find them all on Bandcamp going for $10 each. Those include their 1996 debut album "On The Love Beach", which is probably my favourite of the ones I have had a chance to listen to so far.

They obviously have a bit of a thing about beaches, because Nagisa Ni Te means "on the beach". I have absolutely no evidence to support this theory, but I think it is possible they named themselves after one of my favourite Neil Young albums. There is certainly a noticeable early Neil vibe on "On The Love Beach".

Posted by Ernie Goggins at 06:00 No comments:

It has been a while since we had any country music on here. We'll put that right with a bit of Johnny Rodriguez.

Johnny was big in the 1970s, with six No. 1 country hits between 1973 and 1975, and continued charting regularly until the mid 1980s. He was the first Mexican-American to top the country charts, beating the great Freddy Fender to it by a couple of years.

He sounds quite a character. He was discovered at the age of 18 by a prison warden, having been jailed for stealing and roasting a goat. He has been married three times to date, to a flight attendant, a hair salon owner and Willie Nelson's daughter. And then in 1998 he faced a murder charge after shooting a pal in his house in the mistaken belief they were a burglar. Pretty much the archetypal Good Ol' Boy.

"Pass Me By (If You're Only Passing Through)" - Johnny Rodriguez

You desert blues fans out there may remember me raving about the self-titled debut album by Timasniwen a few years ago. They disappeared from the scene for a while but are now back with a fantastic brand new single, "Tihoussay Tenere", and a brand new name.

The brand new name is Dag Tenere, which means Desert's Children. To mark their return here are a few more children. The last track doubles up as our tribute to Les McKeown, who sadly left us last week.

"The Sidewalks of the Ghetto" - Eternity's Children 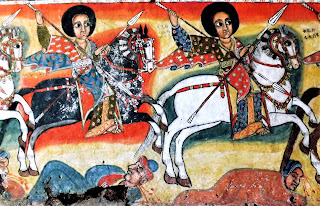 Posted by Ernie Goggins at 08:06 No comments:

The Merest Hint of Hinton

Two tracks from the late, great Eddie Hinton, both from his 1993 album "Very Blue Highway". No further explanation or justification required.

"Rock Of My Soul" - Eddie Hinton

Welcome to what will be the last instalment of the series for now. I intend to come back to it later in the year, as there are plenty more same named acts out there, but five weeks of planning is about my limit. We are, however, going out in a blaze of glory and a flurry of feathers.

We kick off things off with the magnificent "Paraffin Brain" by Robert Lloyd's lads, which still sounds as good as when I first bought it several hundred years ago. That is followed by some fine reggae harmonies by another bunch of Nightingales about whom I have been able to find out absolutely nothing.

We follow the Nightingales with a pair of Flamingos, neither of whom should be confused with The Flamingos as both of them are singular. The first Flamingo hail from the Czech Republic. "Zlom Vaz" can be found on a fabulous compilation of early 1970s Czech rock, blues and jazz called "Rock Line 1970-1974" - with 36 tracks for £10 its a real bargain.

The second Flamingo is an Italian producer who teamed up with fellow Italians Dumbo Gets Mad for this track back in 2013. Having listened to the rest of the EP from which this comes, which is all a bit dull, I can only assume it is the presence of Dumbo that makes this one fly.

A couple of weeks ago our friends over at 40 Year Itch did a round up of albums released in March 1981. One of the albums featured was John Cale's "Honi Soit", which prompted me to dig my copy out for the first time in ages.

I had forgotten what I good album it is. I think you have to be in a gnarly mood to enjoy it - "Honi Soit" is not awash with the relatively mellow easy listening of "Paris 1919", for example - but if are you its a cracker.

The opening track of "Honi Soit" is "Dead or Alive". I understand it was written as a tribute to Pete Burns, who was still an underground goth sensation in 1981. He changed a lot in the next five years.

Posted by Ernie Goggins at 04:07 No comments:

Some late 1980s lovers rock for you today, courtesy of the Queen of the Scene Ms Sandra Cross. Both tracks come from her 1988 album "Comet in the Sky".

Posted by Ernie Goggins at 06:01 No comments:

For the latest episode in our not particularly acclaimed series we have a guest contribution from The Stalwart George. How you feel about that may depend on your views on whistling and the importance of sticking to the tune.

The first Fred Lowery was a blind professional whistler with a recording career that lasted from the 1930s to the 1970s. He had a Top 10 hit in the US with the theme from the film "The High And The Mighty", and his version of "Indian Love Call" sold over two million copies.

Both of those achievements pale in comparison to his greatest triumph, the album "Fred Lowery Whistles Your Gospel Favourites", from which today's selection comes. Apparently George once played it to a class of students during a maths test. I imagine they all failed.

The other Fred was a soul singer from Dallas. I have another one of his records on which he is backed by the magnificently named Big Bo & The Arrows. I must dig that one out for you some time.

It was hard to find anything that fits well with the first Fred. In the end I settled for a bit of langarm music, a style that remains popular with South Africans who hanker after the days of joined up dancing. The first Bobby Hendricks was considered by many to be the King of Langarm (although Jimmy of Jimmy's Grand Six fame may beg to differ).

The other Bobby was very briefly the lead singer of The Drifters in the late 1950s and went on to have a few hits of his own, including this one.

"The Church In The Wildwood" - Fred Lowery

We'll round things off with Slim Whitman and his version of Fred One's million seller. Whistling, yodeling and Agadoo all in one post - it doesn't get any better than this.

We end the week with some rather splendid modern psychedelic soul by Hello Benji & The Cobra. They hail from Medan in Indonesia, but other than that I know nothing about them. Even the connoisseurs at Record Crates United - who know a good sound when they hear it - don't seem to have any more info.

If you like these two tracks - and you should - help support the band by buying them from their Bandcamp page.

Have a good weekend and make sure to come back on Monday as we will have some atonal avant-garde religious whistling courtesy of George (by which I mean it has been provided by rather than performed by George - although I only have his word for that). Until then, back to Benji and the boys to play us out.

We're sticking with this for now.  We have some blue-eyed soul from the first Frankie Miller and the first Little John, who are a them not a him.

Mr Miller will be familiar to our Caledonian readers. The Johns hailed from San Francisco, and this track comes from their self-titled 1971 album. When you listen to it you will not be surprised to learn that it was produced by the man who also produced Blood. Sweat & Tears.

The other Frankie and the other John make good old-fashioned proper music, each in their own sweet way.

"Turn Your Face To A Smile" - Little John

More from the back catalogue of the excellent Sahel Sounds label for you today, with Tuareg sounds from Northern Mali courtesy of Idassane Wallet Mohammed and her colleagues. Just voices, handclaps and water drums, I find it utterly entrancing.

Of course, the Tuaregs of Northern Mali can rock out too when they want to. Here's a bit of that.

Posted by Ernie Goggins at 08:24 No comments: