I was in Milan earlier this week and took the opportunity to pop into the Massive Music Store. Size-wise it doesn't really live up to its name, but they make the most of the space they have. There are piles of CDs in there that start on the floor and end up somewhere north of my navel.

Unfortunately I'm no longer dexterous enough to get down and inspect the bottom half of the piles, and was nervous about trying to extract anything that was more than a foot or so down from the top in case I brought the whole edifice crashing down. So in practice I was limited to only 10% or so of the stock.

Despite that, I managed to gather up some goodies. One such was "Pazza Idea", the 1973 album by the ever lovely Patty Pravo. Here are a couple of tracks. The first one may sound vaguely familiar.

And now, a rather different Patti.

Posted by Ernie Goggins at 20:29 No comments:

I'm back from Mumbai just long enough to change my socks before setting off on my travels again, so here is a very quick one to keep things ticking over until normal service can be resumed. Here is some desert blues from Agadez in Niger. I know this sort of thing always goes down well with at least one regular.

I thought about an "Agadez/Agadoo" thing for the video clip, but you deserve better than that. So here is a weak "Inerane/ In The Rain" pun instead.

Waiting For A Miracle

There's great excitement in the Goggins household at the moment. On Tuesday morning I head off to Mumbai for a few days - a bit of work with a bit of sightseeing tagged on. I've never been before and am looking forward to it very much.

Our musical journey tonight starts in Mumbai and ends in "India", one of the highlights of the Psychedelic Furs's show at the Festival Hall that I was lucky enough to be at last Friday. In between we visit Turkey, Congo, Italy and Brazil, in a more or less random order.

One of the many reasons I'm looking forward to visiting Mumbai is because it is where my grandparents got married back in the 1930s. They originally met and got engaged in Swindon. He got a job as an engineer on the Nizam of Hyderabad's State Railway, and she joined him a year or so later. Today's clip comes from Swindon's other great export, and is dedicated to the late Grandpa and Grandma Goggins.

A Study In Scarlet

I am sure you will be able to detect the connection between today's songs and video. It is pretty elementary.

"I've Been To The Well Before" - The Holmes Brothers

A couple of months ago I spent 24 hours in Addis Ababa - it is a long story for a short visit - and did not have time to go scouring the markets for music. I thought I was going to leave empty-handed, but while I was at the airport on the way out I spotted a small, dusty selection of CDs on one of the sales counters. So I snapped one up.

I opted for a compilation called "The Sounds of Contemporary Ethiopian Music", mainly because it had some reasonably well-known artists on there - the likes of Alemayehu Eshete and Martha Ashagari. When I got it home it turned out not to be all that contemporary, having been released in 1999. I'm not sure whether it had been sitting there all that time, although that might explain the dust.

Anyway, it is a pretty good compilation and definitely worth buying in the perhaps unlikely event that you come across a copy. Until you do, here's a couple of tracks to keep you going.

Meanwhile, in the UK in 1999, this was the second biggest selling single of the year. I think we have to give 1999 to Ethiopia.

Posted by Ernie Goggins at 20:47 No comments: 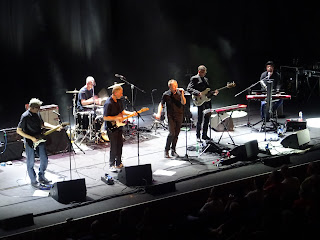 Posted by Ernie Goggins at 06:21 No comments:

I was packing my bag in anticipation of another trip to Zagreb this week, when it occurred to me I hadn't got round to sharing with you the last of the CDs I picked up when I was there a couple of months ago.

So today it is the turn of Grupa Mi, who the man at Free Bird Records described as "the Croatian Blood, Sweat and Tears". Despite that, I still bought the CD. It is called "15 Zivih Komada" and, I would guess from the Croatian language sleeve notes, it is an expanded version of their 1971 album, "12 Zivih Komada".

There are, indeed, a couple of Blood Sweat and Tears cover versions on there, and the lads also have a go at Chicago, James Brown, Sam & Dave and Otis Redding. I imagine they sounded great played live in a sweaty Zagreb club but they don't really match up to the originals on record. So instead here are a couple of their own songs. It is possible the lyrics are more meaningful than they appear to be judging by the titles, but I wouldn't bet on it.

You're an intelligent bunch, I think you'll work out today's theme without me having to spell it out for you.