Before we get onto the main business, a brief follow-up to my post about the Roy Harper gig the weekend before last. I mentioned the cameo by his son Nick. Well it turns out Nick and I have a mutual acquaintance - Richard, the driving force behind the Wild Hare Club in Hereford.

Richard is almost single-handedly trying to keep the live music scene going in Hereford, a very worthwhile aim not least because the local residents will need cheering up after their team was resoundingly thumped in the FA Cup by the mighty Yeovil Town last weekend (Come On, You Glovers!). The next gig is scheduled for 17 December featuring Little Rumba - more details to follow on Richard's website in due course. If you are in the area, get down there. I am sure it will be a cracking night.

Right, on with the show. And this is a sort of follow-up to Roy Harper too. On the Saturday before last I sat in a famous concert hall watching an icon from the 1960s being cheered to the rafters by their ageing but enthusiastic fans. And on the Saturday just gone I did the same, only this I was in the Sala Kongresowa in Warsaw. The icons in question were Czerwone Gitary, the erstwhile Polish Beatles. Only two of the original members remain but they bashed out some great tunes and got the hordes of grey-haired Polish matrons very excited indeed.

Czerwone Gitary means Red Guitars. And as you can see from this shot of them in action on Saturday, they mean what they say. 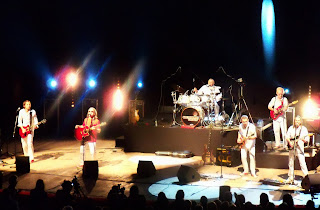 I picked up one of their albums from the merchandise stall afterwards - 1971's "Spokoj Serca". While it is not bad by any means they had largely given up on the catchy pop songs in an effort be serious artists, so it wasn't quite the beat-tastic treat I had hoped. Here are a couple of the better selections.

The lads were very highly regarded in their day and attracted the interest of a lot of Western musicians. Loudon Wainwright III was a particular fan. Here is his tribute to them.

And here are the boys in their pomp. Personally I can't see any Beatles influence there at all...