I got back from Budapest last night laden down with vintage Hungarian vinyl acquired from an excellent shop on Paulay Ede Utca, the name of which I have forgotten - if you start from Deak Ferenc Ter metro it is about a block and a half up on the left, and you need to ring the bell to be allowed in.

The Hungarian albums are upstairs and go for 600 to 1800 forint (roughly £2 to £6), and if you ask nicely the owner will open up the storeroom where he has loads of old singles on the Qualiton and Pepita labels going for 250 forint. It will be a while before you (or I) get to hear them - they have been added to the backlog along with the Danish stuff and new Tsonga Disco that regular readers have heard me droning on about previously.

While in Budapest I visited the trendy Godor Klub - which is located underneath an artificial lake, so you make sure not to sit near any cracks in the ceiling - to catch a gig by Mari Nyeso. This is her. 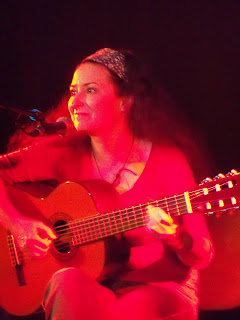 Mari performs a mix of folk, jazz and blues and is pretty nifty on the old guitar, as the YouTube clip below demonstrates. Vocally she reminded me a little of Phoebe Snow. I don't have any of Mari's recordings, so here is a bit of Phoebe as a substitute, including her cover of The Roche's "The Married Men" - which is copied from vinyl, so apologies for the quality.