Very occasionally you go along to a gig to see one act and get blown away by someone else on the bill who you have never heard of previously. That happened to me last night. And we were doubly blessed because the person I had gone to see blew me away as well.

We (the old lag Mister F and I) were at the Cafe Oto in Dalston. I had gone specifically to see Sarabeth Tucek, having heard and really liked a couple of tracks from her current album "Get Well Soon". She pretty much played the album - as the guitarist acknowledged five or six songs in when he intoned "Side 2" - and was every bit as good as I had hoped. It is an excellent set of songs, many of them inspired by the death of her father (including today's selection). And she has a good, strong voice which at times had hints of Natalie Merchant, but which at other times reminded me slightly of all sorts of people from Tift Merritt to old Neil Young. I suppose the lack of easy comparisons makes it distinctive.

Sarabeth was second on the bill and when she finished I was thinking "mission accomplished" and that it didn't really matter whether or not the headliners were any good. So I was first surprised and then delighted by This Is The Kit. "The Kit", as they are possibly known to their die-hard fans, are primarily a vehicle for the music of singer, songwriter - and possessor of a very practical pouch for taking the weight of her banjo while playing - Kate Stables.

They are essentially a bunch of young old hippies playing what you could loosely call English folk-rock (some have said Appalachian folk, but then Appalachian folk is only English folk with a banjo). The last time I was at the Cafe Oto it was to see Mike Heron of the Incredible String Band, and This Is The Kit have something of the same sensibility. As with Sarabeth Tucek, we got a set of good songs well sung. I would hesitate to compare anyone to the incomparable Sandy Denny, but Kate has something of the same sort of tone to her voice.

Here is a selection from their most recent album, "Wriggle Out The Restless", chosen primarily because it contains the phrase "dubbin up your boots". As a bonus I have added a song released by Kate's side project Whalebone Polly, which also got an airing last night.

"Waterproof" - This Is The Kit

Finally, let us not forget the opening act Liz Janes. She got rather overshadowed by what followed but I thought she was pretty good as well - certainly much better than you have a right to expect of an act bottom of the bill in a cafe in Dalston on a Monday night. I thought I had never heard of her, so imagine my surprise when this morning I found one of her songs on my iPod. It comes from "Achoo!", a 2006 compilation album on Asthmatic Kitty records, and here it is.

Here are a couple of photos I took at the gig last night, the first of Sarabeth Tucek and the second of Kate from This Is The Kit. In the unlikely event you are interested there are a few more over on Flickr. 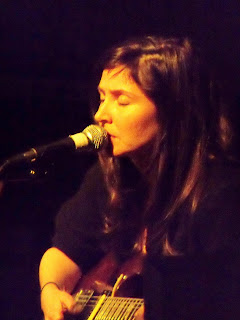 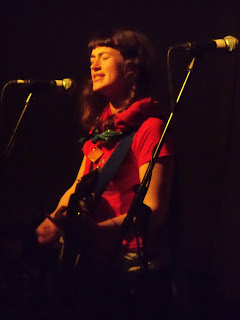 To finish off, here is a video for a track from Sarabeth's self-titled first album.