I have just come back from a few days in Copenhagen, part work, part pleasure. On Friday night I popped into Wray, a very nice little venue in the Christianshavn district, named after that one-time Copenhagen resident, Link Wray. There were three acts on the bill: So Like Dorian (from Denmark), Comaneci (from Italy) and Mattia Coletti (either Denmark or Italy - it is very hard to tell with a name like that).

It wasn't the best attended gig I have ever been to. I counted twelve people in total. If you take out the bands and the barman that comes down to six. And if you then take out the friends of So Like Dorian it comes down to two, and the other feller sat at the bar with his back to the show most of the evening, so I am not sure he counts. Anyway, on behalf of at least 50% of the non-aligned members of the audience I can say that, while not all the music was to my personal taste, it was a very pleasant way of passing the evening.

For me the pick of the bunch were Comaneci, who are Francesca Amati on vocals and acoustic guitar and Glauco Salvo on electric guitar. When I spoke to them afterwards - in the circumstances it would have been more awkward not to - Francesca was utterly charming. Glauco is possessed of a prodigious beard that put me in mind of a young Ronnie Drew (from the Dubliners). The photo below doesn't really do it justice. 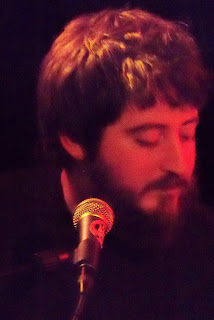 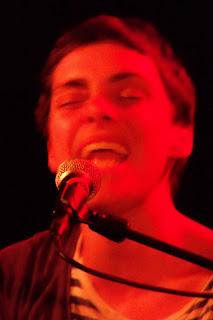 Rather that inadequately attempt to describe their music, here are a couple of selections from their most recent album, "You A Lie", which was released in 2009 on the Madcap Collective label and is available on Amazon and eMusic. They are working on a new one and, judging by the track they played on Friday which featured some very atmospheric guitar work from Glauco, it will be worth looking out for.

And in the absence of any YouTube clips of Comaneci, here is the young Ronnie Drew. Actually I think Glauco's beard may be more advanced than Ronnie's was at a similar stage in his career, which holds out hope that it may grown into something truly remarkable in the future.

And, by way of a small tribute to the sadly departed Gil Scott-Heron, here he is with one of his many great songs.