The Victoria public house in Dalston undoubtedly has many charms (although a lack of proper beer is not one of them), and it has a nice big room at the back that can take about 150 people. Even so it is not the sort of place you would expect to see hotshot music types playing on a Thursday night in December.

However the Victoria also happens to be Green Gartside's local, which is presumably why he chose it as the venue for his first gigs as Scritti Politti in about four years. They played there on Thursday and Friday nights just gone, and Mister F and I were lucky enough to be there on Thursday to join in the fun.

And great fun it was too. Scritti played an excellent set which covered the very early days ("Skank Bloc Bologna"), the Eighties hits, the comeback album from a few years ago and a couple of new songs which Green described as "work in progress". The new ones sounded pretty good although some of the harmonies on the song provisionally called "Slow Deceit" were a bit too 10CC for my taste.

Not only that, to get us in the festive spirit there was a raffle, pass the parcel, mince pies and a cocktail of Mr and Mrs Gartside's own devising which included Guinness and Drambuie among other things and tasted like a liquid Christmas pudding.

First up on the night was our old friend Robyn Hitchcock. He is a bit of a poseur but he writes a nifty song and got things off to a fine start. He also reappeared at the end of the evening to duet with Green on a very nice version of Nick Drake's "Free Ride". Here is that performance captured on my trusty camera. Apologies for swearing in the middle when Mister F stuck his mobile phone in the way.

I knew Scritti and Robyn would both be good, but the surprise package for me was Alexis Taylor of Hot Chip. I know nothing of their work but Mister F assures me that, like almost all modern music, there are no proper tunes, you can't make out the words and it is all just bang bang bang. So I hadn't been expecting the mellow, soulful set that Alexis gave us in the company of Rob Smoughton on guitar and vocals (Alexis himself providing keyboards and vocals). They bookended the set with covers of "Be Careful" by R. Kelly and "Let Me Roll It" by Wings, and listening to them you could almost imagine they had just stepped off the plane from Muscle Shoals.

You have been very patient so as a reward here is a track apiece from Scritti and Robyn. These weren't played on Thursday but if they had been it would have made an excellent night even more excellent. I don't have any of Alexis Taylor's music so instead here is the Wings original of the song with which he finished his set. And as a further nod to him, here is the old Willie Nelson classic he played when DJing later (in between the Incredible String Band and "Move Closer" by Phyllis Nelson - it was that kind of night).

"Mr Wife And My Dead Wife" - Robyn Hitchcock & The Egyptians

And here are a few photos from the night. 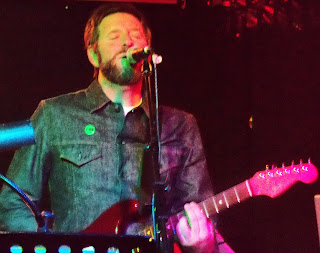 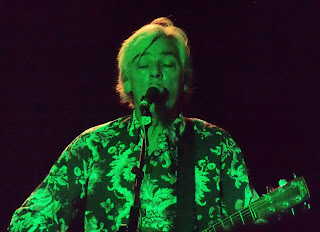 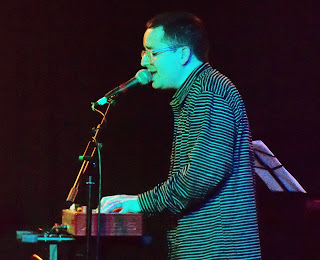