It has got to that time of the year when you start looking back over the music of the last twelve months and drawing up lists designed to demonstrate that you have left the zeitgeist behind you and moved into realms of hipness previously unexplored. Mine may or may not appear between Christmas and New Year depending on when I get away from the Premier Inn in Watford.

But while doing so I rediscovered loads of stuff issued this year that I had intended to share with you but never got round to and, in most cases, probably never will. Here are three exceptions which have one thing in common - they are all Swedish artists.

Sakert! is Annika Norlin, formerly of Hello Saferide. This track comes from her album "På Engelska", released in October, which contains English language versions of songs previously head on her album "Facit".

Det Vackra Livet  is a side project from Henrik and Philip Ekström of The Mary Onettes, and one in which they appear to have been transported back to the 1980s.

Of Twiggy Frostbite I can tell you nothing, having long since lost the PR blurb I was sent, but this is what they look like. 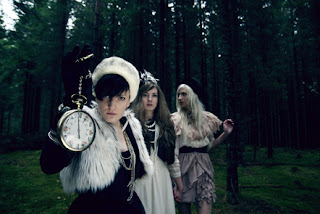 "By The Ocean" - Twiggy Frostbite

Because I am feeling in a holiday mood, here are another seven Swedish songs of various vintages. They include Träd Gräs Och Stenar's cover of the Teddybears classic "Punkrocker" and what appears to be a sincere tribute to Ace of Base from Jaqee. All that Swedishness is makin' me itch.

"And I Found This Boy" - Maia Hirasawa