Average-Sized Earl And The Girls

Yesterday afternoon saw us in Brockwell Park, basking in the sunshine at the annual Lambeth Country Fair. The main reason for going was to support my friends True Identity - who I have written about before - who were in turn supporting Little Roy as his backing singers. The weather contributed to a big turn-out, and it was great to see them strut their stuff in front of a much larger audience than usual. I am sure they got many new fans in the process. 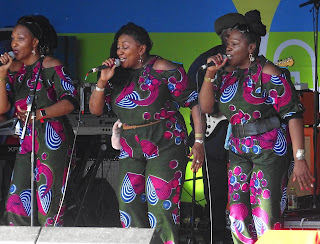 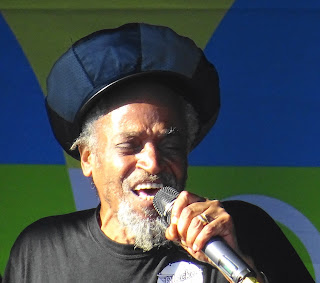 Little Roy was no mean shakes himself. His choice of sobriquet is a bit of a mystery. His real name is Earl and, from where I was standing, he did not look particularly little. But Average-Sized Earl isn't much of a stage name I suppose. I can only assume that having settled on Roy, he found there was another, more established, one he had to distinguish himself from. Perhaps Roy Shirley. Or maybe even The Big O.