In Praise Of Pete's

I spent three nights in NYC last week. On two of those three nights I ended up in Pete's Candy Store, an excellent bar/ music venue just around the corner from my hotel in hip Williamsburg (note to self: remember to buy a plaid shirt and grow bad facial hair if I ever intend to go back to Williamsburg).

The music room is tiny - no more than ten feet wide by about forty feet deep - and I doubt you could squeeze more than about 50 people in there, even less if there is a full band as they won't all fit on the stage. There is no entry charge, just a tip bucket passed around occasionally, and the sound system isn't great (though it may just have been playing up while I was there).

But despite all this, it manages to attract a very high quality selection of bands to play there. Over the two nights I saw five acts and they were all worth a listen. The Goggins Prize for most entertaining set went to Sgt. Dunbar & The Hobo Banned, whose musical style I would struggle to describe but were great fun. Here are a few shots of them in action. 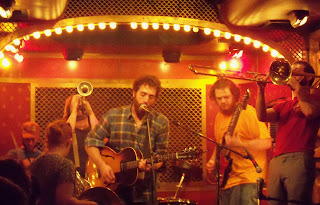 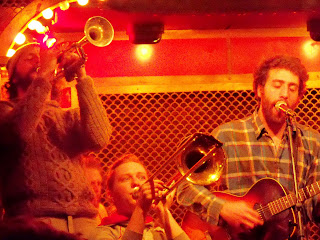 Of the other acts special mentions go to Katie Brennan, for achieving the seemingly impossible and manouevring a full-sized harp through the side door and on to the stage, and the Eureka Birds for not being too embarrassed when they realised that half the audience consisted of their parents, some of whom had come all the way from Maryland. That's parental devotion for you.

To help you create the Pete's ambience in the comfort of your own home, here is one track from each of the acts I saw in the order in which I saw them. Pour yourself a drink, adjust the tone control on your music player so you can hardly hear the vocals, turn the volume up loud and off you go.

On the subject of candy, this one is for the younger members of the Goggins clan in South Salem N.Y., who are very keen on the stuff.
Posted by Ernie Goggins at 19:40