As regular readers of this drivel will know, I have to go over to Brussels for work a few times a year. While there I always try to find time to pop down to the Matonge district to trawl through the Congolese record shops. Pickings are not as good as they used to be since Musicanova shut down, but there are still gems to be had. Such as "Mortel Combat", the 2005 album by Alain & Bouro Mpela, which I picked up on my last visit. This is them in their everyday wear: 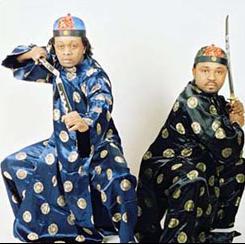 ﻿Bouro used to play with Koffi Olomide, but apart from that I don't know much about them. On this album they are backed by Alain's band, Generation A, and a very good job they do too. Mostly rumba, but with the occasional bit of reggae and a 1980s soul vibe thrown in. Here are the first three tracks from the album.
"Mortel Combat" - Alain & Bouro Mpela
"Aicha" - Alain & Bouro Mpela
"Passage Obligé" - Alain & Bouro Mpela
From the same album, here they are all done up in their glad rags. I particularly enjoy the entirely random reference to mozzarella at 3:29.

And as a Sunday bonus, some more musical brothers.

Actually, there are loads of them, aren't there? Watch out for a special brothers themed post here some time soon.