December got off to a bit of a flyer with a top notch "What's Cookin'" night at the North Star in Leytonstone last night. Three acts for the price of whatever you were willing to put in to the tin.

First up was Dan Somebody or Other (I didn't catch the surname). He only did two songs which wasn't long enough to leave much of an impression, but they were good enough to make me want to hear a full set some time. The chances of my doing so will obviously be improved if I can work out his name.

Second was the redoubtable Alan Tyler, seen here in action (I was testing out a new camera). 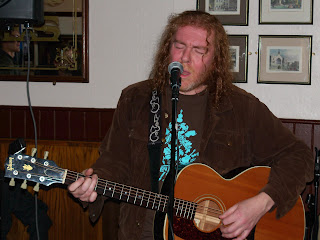 Again this was just a short set but it included favourites like "Middle Saxon Town" and ended with a Jonathan Richman cover. Of course, Alan has been proclaiming his love of Jonathan's music since way back when.

Topping the bill, and rightly, was the exotically named Gurf Morlix. The story behind the name - which disappointingly isn't the one he was born with - was explained in an interview with "No Depression". Here is Gurf (still testing). 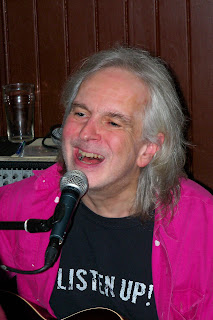 Like most people, I suspect, I am mainly familiar with Gurf as a sideman and producer, and in that respect his track record is impeccable. He has played on and/or produced many of my favourite albums of the last fifteen years or so, and I will feature some of those in the next post.

Judging by last night he is pretty good as a frontman too. He played a excellent set, which was a well judged mix of some pretty strong originals and some more familiar cover versions (Bob Dylan, The Beatles - you may have heard of them). He also told some entertaining yarns about his time with the late Blaze Foley, who he worked with for a number of years in 1970s and 1980s.

They recorded a lot of material for an album in 1979 and 1980 that came to nothing after Blaze managed to lose the master tapes and then record over the only surviving cassette copy. Gurf thought the recordings had been lost forever until he got a call out of the blue a few years ago from a studio engineer who had found a back-up copy gathering dust somewhere. Gurf tidied them up a bit and they were finally released in 2006.

Here is one from that album, and one from Gurf himself.

For today's clip, lets go back to the Rockingbirds and the video for the "hit". Doesn't he look young? If it wasn't for the hair I'm not sure I would recognise him.
Posted by Ernie Goggins at 08:16