While in Brussels a few weeks back I picked up a couple of cut price CDs by Belgian acts that I had never heard of before. We will be featuring them both this weekend.

First up is "L'Homme Libellule", the 2007 album by Miam Monster Miam. My attention was caught by the cover: 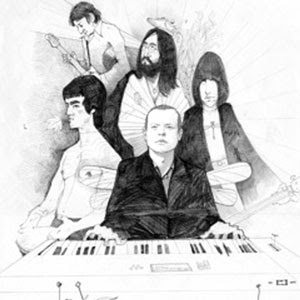 Miam Monster Miam is the pseudonym of one Benjamin Schoos. That's him at the keyboards, immediately in front of John Lennon. The one on the right looks to me to be Johnny Ramone. I'm not at all sure about the other two. I would hazard a guess at Ian Curtis on the left and Serge Gainsbourg at the back, but any suggestions welcome.

"L'Homme Libellule" is a French language concept album about a dragonfly-man who comes down to Earth to save mankind. "Not that old chestnut", I hear you sigh. I'm afraid so. But Schoos finds something new to say on this traditional theme and does so in a rather entertaining way.

Musically the album is a mix of electro pop, prog, Serge Gainsbourg and all sorts of other things. The first of today's selections, for example, reminds me very much of Kevin Ayers. Anyway, without further ado, here they are:

And as a special treat, here is Kevin Ayers from 1973 with a promotional video of "Caribbean Moon". Things get seriously disturbing at around 1:28. Homo-eroticism and ukeleles - it really does have something for everyone.