Today we bring you a couple of selections from a CD I picked up in Paris earlier in the year in one of the countless tiny African music shops near Marcadet-Poissoniers metro - "Panache" by the exotically named Yulianna Wom. 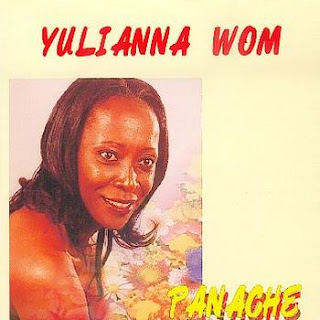 I have not been able to find out a great deal about Yulianna. I assume she is from Cameroon as the contact address on the CD is in Douala, although the album was recorded in the unlikely setting of the Euro Gospel studio in La Louviere, Belgium. Yulianna wrote and produced the album herself, with the help of musical maestro Didier Likeng. According to Sterns website it was released in 2001.

Most of the album canters along at a perky mid-tempo but, as it is Sunday, we will give you one of the slow tracks as well.

One thing I haven't established yet is whether Yulianna is a distant relative of Barry Wom, drummer with the legendary Rutles. I assume not but you never know. Here they are in concert in the Shea Stadium in 1965.