Something fairly new to start things off today, with thanks to John at Safety First Records who tipped me off to "Must We Find A Winner", the new album by Klak Tik. Although apparently first released last year, it will only be available on iTunes and all the usual outlets from tomorrow. I would recommend you find time in your busy diaries to wander over there and check it out.

The driving force behind Klak Tik is one Soren Bonke, a Danish singer/ songwriter/ multi-instrumentalist. The band itself appear to be based in East London, as am I and at least one of our regular readers. We will need to keep an eye out for characters carrying chairs around for no good reason, as it might be them. 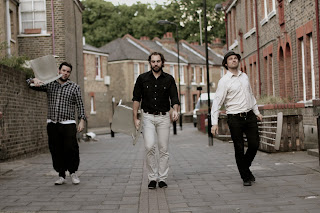 The band describe their music as "sparse and tender folk tunes expanded to produce multi-layered, pseudo-orchestral pieces of music", which seems a fairly good description to me. For those of you who prefer direct comparisons, there is a definite Midlake/ Fleet Foxes vibe to much of the album, and I would think fans of those bands will like this a lot. For older farts like me, there is also a whiff of Caravan and other bands from the pastoral strain of early English prog-rock, which is no bad thing in moderation. I liked it the first time I listened to it, and I liked it more the second time - on which flimsy basis I am prepared to stick my neck out and call it a grower.

Also from Denmark, but a lot older, are Bifrost. Active from 1976 to 1987, I picked up their self-titled debut album for a few pounds while in Copenhagen recently. The fact that they are named after the bridge that joins the world to the realm of the Gods in Norse mythology, the copious references to Christiania in the Danish language sleeve notes, and this album cover led me to hope it would be fairly freaky. 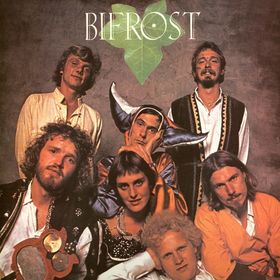 I was disappointed. It turned out to be fairly bog standard 1970s rock. But not without its moments. Here are a couple of the highlights.

Rather better on the Danish hippy front were The Savage Rose. I picked up a few of their albums while in Copenhagen and will do a post featuring them when I get round to it. As a taster, here they are freaking out the Norwegians in 1973.