We seem to have been featuring a lot of very good female singer-songwriters here recently. Here is another one.

Austin-based Vanessa Lively is new to me, although she already has three albums to her name. He fourth album, "Uncovering Stones", is released on 21 June. Copies can be pre-ordered from her website now. You ought to give it some serious consideration.

While over at her website, check out the press page where there is lots of photos and interesting information, including three different versions of her biography (long, medium and short). You ought to read the long version, as she and her husband Jason have clearly led quite a life, but here is the short version as a taster:

"For a woman who thrives on jumping into the unknown with both feet, Vanessa Lively took an unusual approach to her new album, Uncovering Stones. She and her producer-husband, Jason, planned nearly every note before recording it – which they did in their Austin home, with co-producer/engineer Keith Gary. The result is a compelling mix of tempos and styles filled with hints of urban, world, Latin, funk and pop that fully captures her compassionate nature and love of community. Uncovering Stones is, in fact, all about connecting. Vanessa even painted the album art beforehand – on 42 canvas squares she sold individually to fund the 12-song disc. Lively describes its themes as “feeling other people’s struggles and joys and being connected with them.” After raking blueberries in Maine as a migrant farm worker and living in South America with her husband to do volunteer work in impoverished areas, she feels those connections deeply – and when you listen, you will, too." 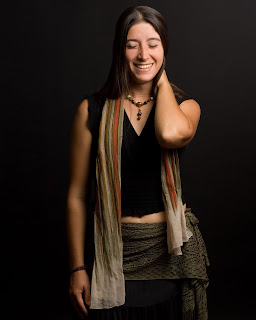 Here are a couple of my favourite tracks from the new album.

"Through The Veil" - Vanessa Lively

And here they are performing the old Mercedes Sosa song, "La Maza", on "Good Morning Austin" last year. Not the sort of thing you normally associate with breakfast television, at least not in the UK, but it would definitely help the corn flakes go down smoothly.