Today we feature the man who is indirectly responsible for this blog. You may wish to thank him or you may wish to curse him - I leave that to you.

Regular readers and those of you who have spotted the sub-title at the top of the page will know that I originally started this blog in order to share my new found love of Tsonga disco music with the world.
While I don't feature it as often as I should these days, it is still the main reason for the blog and it has helped me make new friends and acquaintances as far afield as Brooklyn, Belgium and Mozambique.

As explained in my first post on the subject three years or so ago, the first time I heard Tsonga disco (also known as Shangaan disco) was when I came across a CD by a gent calling himself Madlaks in Cape Town. I fell for it instantly and since then have managed to build up a collection of 40 to 50 Tsonga CDs. However I had never been able to track down anything else by Madlaks, the man who kicked it all off.

That was until a couple of weeks ago when I was back in the African Record Store in Long Street in Cape Town where I first came across him, and I was delighted to find him smiling back at me from the racks. 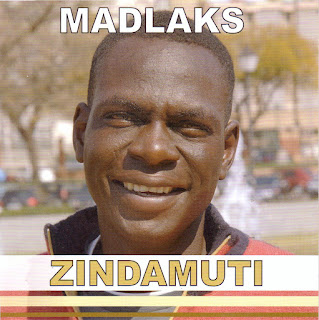 Zindamuti came out in 2009. It is not quite as frantic as "Ndhlo Ndhlo Volume 1", but is none the worse for that. Here are a couple of prime cuts.