An excellent show by Fairport and friends at the Barbican last night. It was basically a roughly chronological run through highlights of their first five albums, the first half being given over to their American-influenced period and the second half to "Liege and Lief" and "Full House".

It started with five of the six original members - Dyble, Hutchings, Matthews, Nicol and Thompson with Dave Mattacks on drums in place of the late Martin Lamble - then introduced various guest singers to cover Sandy Denny's parts. They were all good but Chris While was the pick of the bunch, kicking the second half off with a rousing rendition of "Come All Ye" and more than doing justice to the likes of "The Deserter" and "Matty Groves". Unlike some of the singers I have heard with other Fairport line-ups she doesn't attempt to sing them like Sandy, but manages to capture the original spirit much better.

One of the other singers was Linde Nijland, who took the lead on "Fotheringay" and "Si Tu Dois Partir". With her loyal accompanist Bert Ridderbos she also gave a very good free show in the foyer before the main event. Here they are in action: 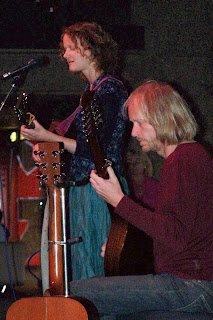 Linde has released a few CDs including one of Sandy Denny songs, which was mostly what she played yesterday. She is or was also one half of Ygdrassil, the other being Annemarieke Coenders. Here are a couple of tracks from their 2005 album "Easy Sunrise": "In A Lonesome Town" - the only original she played last night - and a very nice cover of the Trees' "The Garden Of Jane Delawney":

Here is a clip of Ygdrassil performing their version of "Cruel Sister" from the same album: