If David Peel is remembered at all these days it is probably as a one-trick novelty act. His moment in the spotlight came in the early 1970s when John & Yoko adopted him as their pet hippy, signed him to Apple and produced his album "The Pope Smokes Dope".

And while much of the rest of his recorded output (he is still recording) covers the same subject matter over and over again, and most of it is pretty ropey, it would be unfair to dismiss him completely - if only because he made one fantastic album "The American Revolution" (1970 and pre-Lennon). 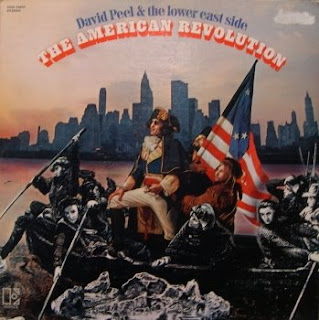 I bought the album in a junk shop in the early 1980s mainly because of the cover and did not have any great expectations of the music, but was very pleasantly surprised. What I like about it most is the raw energy. At its best he manages to bridge the seemingly unbridgeable divide between hippies and punks. Here are a couple of examples (recorded off my battered vinyl copy so apologies so any imperfections):

"I Want To Kill You" - David Peel & The Lower East Side

"Oink Oink Oink" - David Peel & The Lower East Side (you need to stick with this one, the first 40 seconds or so are "acting")

On the other hand, the hippie novelty act view has something to commend it as well: