Yesterday I went to visit my newest niece Maya, who is also affectionately known as Pookie. While in the area I popped into the local charity shop to find myself confronted by an album by a band called Poogy. It semed like a sign, so I snapped it up immediately.

Even without the Pookie connection I would have been tempted by the cover which features a black and white photo of seven groovy dudes with big collars, striped tank-tops and the like superimposed on colour photos of pita bread and assorted vegetables. Apart from the name "Poogy" and the song titles, most of the writing was in Hebrew. Just like this, in fact: 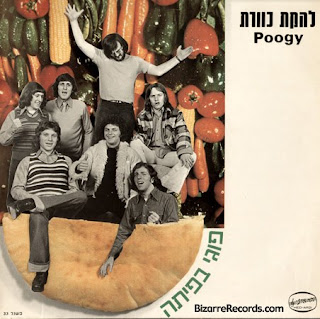 A little research revealed that the album is called "Poogy In A Pita". Released in 1974 it is the second album by a band known as Kaveret in Israel but known as Poogy when performing or releasing records in other countries. I must confess to being slightly baffled by this. What marketing genius sat down with the band and said "Look, lads, with a name like Kaveret you will never crack the US or Europe. Now if you call yourself Poogy on the other hand..."

The lead-off track on the album is "I Gave Her My Life", which was Israel's Eurovision entry that year, finishing a plucky seventh. On first listen it and most of the other tracks are pleasant but fairly unexciting. The two exceptions are an instrumental called "Left Handed Octopus", which features "the Oriental Music Orchestra conducted by Zuzu Musa", and the final track. This is a six and a half minutes pop-psych magnum opus called "The Ballad of Arriverderchi", and here it is. Apologies for the sound quality at the beginning - it gets better.

All in all though, judging by this clip, the first album "Poogy Tales" is the one to get: