What a great weekend. The extended Goggins family gathered on Saturday for my cousin's wedding, and then reconvened again on Sunday lunchtime for a barbeque before seeing the happy couple off on their honeymoon. At the barbeque some of the younger Goggi realised they were able to clamber up the inside of the ten foot high garden hedge, leading to surreal sights like this one. 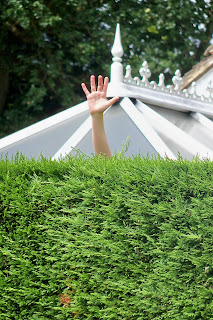 Keeping up the surrealism, I then headed off to the South Bank to meet up with Mr F for a concert by Os Mutantes. The Festival Hall was barely half full but 80% of those who were there were Brazilians and their enthusiasm more than made up for the empty seats.

I only know a few Os Mutantes tracks so most of what we heard was new to me, but I enjoyed most of it very much. Some parts were a bit more AOR than I had expected. There was one extended Santana-style workout followed by a power ballad that had all the Brazilans singing along. I can only assume that after the early experimental for which they are known in the UK they went a bit more mainstream, with greater commercial success - the Jefferson Airplane to Starship transition, if you like. But overall, very good.

The gig was part of the South Bank's Festival Brazil season. I don't have any Os Mutantes for you but, in the same spirit as the South Bank, here is a mini-festival of Brazilan music.

Somewhat implausibly, the Ossies paid tribute to the ground-breaking work of Sergio Mendes. Stuff like this.