We were gigging again last night. This time it was off to Leytonstone for "What's Cookin'" and another opportunity to see the mighty Otis Gibbs upstairs at the Sheep Walk. The pocket-sized Steve Earle was in fine form. 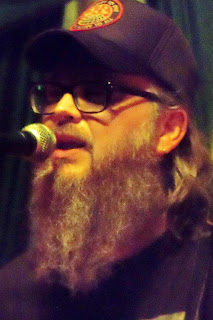 I have seen Otis three times in the last twelve months, twice at the Sheep Walk and once at the Borderline. While he deserves a huge audience, I think he is best enjoyed in a smaller venue (there were 80-100 people there last night and you couldn't have got many more in) because he can really work that room.

It was another great evening, climaxing as usual with an unamplified rendition of "Karlov Most", performed while strolling round the room smiling benignly. He finished the song standing next to me and gave me a wink at the end. One mild criticism is that he could do with updating some of the patter - I think I know it almost off by heart now. But it is really very good patter, and who wouldn't want to hear the tale of Uncle Briscoe and the infant Otis again.

For the clip, you may want to skip through to about 0:45 when Otis gets going.