I had a day trip to Brussels the other week and, in between meetings, managed to find 30 minutes to pop down to Musicanova and pick up a couple of African CDs.

Because of the former colonial connection there is a sizeable Congolose community in Brussels and this is reflected in Musicanova's stock. There are plenty of CDs from the big names - Franco, Zaiko Langa Langa, Sam Mangwana etc - but also plenty by lesser lights. Being an appalling music snob, I am naturally drawn to the latter. Whenever I go there it is inevitable that I will buy at least one CD by someone I have never heard of, the only question is which one will catch my eye and why.

On this occasion I chose "Tenue Correcte", the 1994 album by Gloria Tukhadio. The reason will be self-evident as soon as you see the cover: 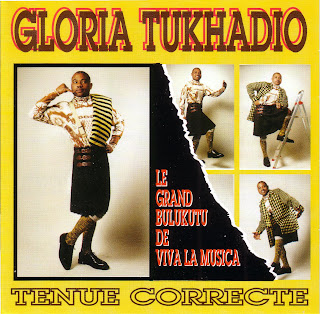 What is going on there? Why the kilt? Why the step-ladder? And why is he called Gloria? Judging by the pose on the left, I can only assume it was an affectionate nickname inspired by his passing resemblance to the Melvyn Hayes character on "It Ain't Half Hot, Mum".

The music was never quite going to live up to that cover, but it is pretty good. As it should be with the pedigree of some of those involved. Gloria was formerly a singer with Papa Wemba's Viva La Musica band in the 1980s, and is backed by members of Viva La Musica on this album. On "Midi", Papa Wemba himself joins in the vocals while the legendary Papa Noel takes on the guitar duties. There is also an Abdoulaye Diabate on keyboards but I am assuming it is not the singer/guitarist from Mali of the same name.

Here are a couple of highlights:

For those of you whose cultural frame of reference failed you when I referred to the 1970s British sitcom "It Ain't Half Hot, Mum" - a laugh a minute potpourri of racial, sexual and class stereotypes - here are two of the stars with their Number One UK hit single from 1975 (no, really).