On Friday I went to the Union Chapel in Islington to see Rickie Lee Jones in concert. I last saw her about twenty years ago at the Dominion Theatre and on that occasion she gave the distinct impression that she really didn't want to be there. That certainly wasn't the case on Friday. We got two hours and fifteen minutes and she only stoppped then because she was told she had to (they have a curfew at the venue).

Another difference was that while at the Dominion she hid behind the piano for the whole show, this time round she mainly played guitar - although with a few numbers at the piano and a brief stint behind the drums for "Satellites". Accompanied by Joey Maramba on bass and effects and Wyatt Stone on just about everything else, there was a loose feel to the music which really suits her style. And she was in great voice.

I'm not sure any Rickie Lee agnostics would have been converted on Friday, but for a long time fan like me it was a great experience. We were treated to some selections from all of her albums apart from "Ghostyhead" and the two albums of cover versions. Many of them were old favourites I hadn't been expecting, and at least some of them came as a surprise to the two lads as well. Frequently Wyatt Stone would have to linger tentatively waiting to hear what Rickie Lee was going to launch into next before heading off to whatever instrument was required.

There were too many highlights to list them all, but there was one particularly good sequence that kicked off with "Living It Up", which started off fairly faithful to the original but halfway through turned into a banging dance track with the introduction of a heavy drum loop. It was followed by "His Jeweled Floor" (from last year's "Balm In Gilead"), which begun almost as a gospel number and ended as a mad noise freak-out. And then Rickie slowed it all down with a lovely version of "Bonfires" (also from "Balm In Gilead") which was just her and her guitar.

Here are two of three originals:

And here are a couple of personal favourites that she didn't do:

Here are a couple of photos I took at the gig (not the greatest quality, apologies): 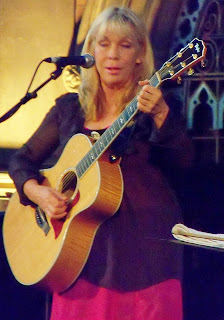 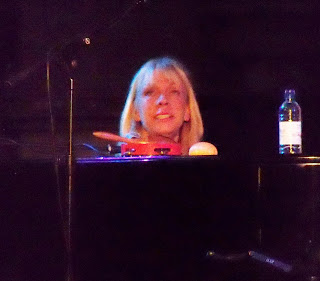 And, to finish off, here is a vintage clip of the girl in action:
Posted by Ernie Goggins at 16:47