A belated welcome to 2012. I am just back from a week in Sorrento and Naples, and very nice it was too. For fans of skulls, I would particularly recommend a visit to Santa Maria delle Anime del Purgatorio ad Arco in Naples. It must be one of the few Catholic churches with a practicing death cult in the basement. This here is Lucia, the patron of young brides. 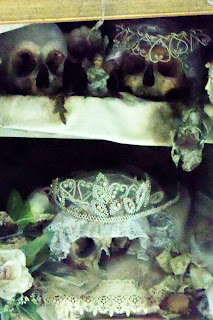 I even managed to catch a gig while in Italy, by Raphael Gualazzi, the Italian Jamie Cullum and runner-up in Eurovision 2011. It was not really my sort of thing, but he puts on a good show. It was also notable for a bizarre attempt by the organisers of the Sorrento Jazz Festival (whose event it was) to impose a photo ban at a free concert held in the main square. I bravely defied this ban to bring you this exclusive photo of Raphael in action. 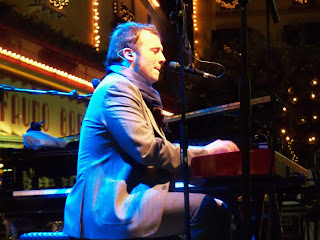 I have never really hit it off with modern Italian music. The old stuff is a different matter. One can only agree with Jeff Lynne that Puccini knew how to lay down a tune, and I enjoy a good burst of 'Volare' as much as anyone. But what I have heard of the more recent stuff usually leaves me cold. Needless to say, I did not let that stop me buying loads of it. You will be lucky enough to share it I am sure.

We start with one Ivan Cattaneo. According to the automatic translation of his Italian Wikipedia page he was born in Bergamo in 1953, was thrown out of the Italian army for "extravagence" and released a number of independent albums in the mid to late 1970s, before signing with a major label and striking it big with his hit single 'Polisex' in 1980, which "soon became a sort of hymn of the so-called alternative in Milan during the eighties". He effectively turned his back on music to take up painting in the mid 1980s and has only made a couple of albums since.

The CD I bought, in the seminal "I Grande Successi Originali" series, features his 1970s recordings. Some of the titles looked promising - "Sexo!", "Bimbo Assassino" ands "Il Bambino E Perverso" for example. On the whole it is pretty tame stuff though. Here are a couple of the better numbers.

I will leave you with this old Italian standard, the chorus of which happens to be exactly what I said to the security man in Sorrento who tried to stop me photographing Raphael Gualazzi.