A Little Bit Of Religion

I am indebted to Mr F for drawing my attention to this article about Anna Nobili (or, as I think of her, the future Mrs Goggins):

I have always had a bit of a fondness for nuns - it is probably a combination of them being unattainable and a bit of a uniform fetish. But even I had never envisaged a lap-dancing nun.

This bad habit (ho! ho!) has occasionally got me in trouble. About twenty years ago me and the lads were on a tour of Italy. We arrived in Pisa to discover that the Pope - the proper one, not this one they have at the moment - was in town to do a gig that night. So we went along, of course. As you would expect the crowds were many rows deep and we didn’t have a great view as the Popemobile came down the road towards us. Behind us there were a gaggle of nuns who, being generally pretty short, could not see a thing. This didn’t seem right to me, what with him being their boss and everything, so I asked one of them if she wanted to sit on my shoulders. The next thing I knew I was being slapped and shouted at by her irate Mother Superior.

In hindsight I realise that my offer, although well-intentioned, was inappropriate. And it probably didn’t help that Conical and I looked like this: 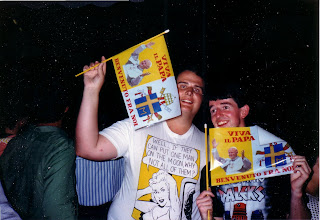 Sadly I have no songs by nuns, so here instead are The Monks with “Cuckoo”:

And to finish off, here is a clip of The Singing Nun performing a 1980s disco remake of her big hit, “Dominique”. Which is just as bad as it sounds. And she’s not even wearing the uniform.