I'm back from a week in Spain. The new Tsonga Disco CDs arrived in my absence and will appear here as soon as I have had an opportunity to listen to them.

Most of the week was spent in Vejer, a beautiful Andalucian hilltop town, roughly midway between Cadiz and Algeciras. It is well worth a visit if you are in the area. One of the cultural highlights is an unnamed shop in Calle Juan Bueno which sells all sorts of rubbish and has a small display of vintage radios. If you show any interest in these the owner will open up his back room and show you his full collection, which must be one of the best in the world. Here he is with a small selection: 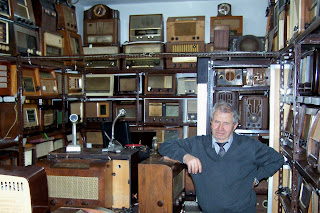 He also sells a small number of dusty cassettes that date back to the 1970s and 1980s. I bought a couple of early albums by Isabel Pantoja, a traditional singer from Seville (although on one of the albums they included some more poppy arrangements that I really liked). At present I don't have the technology to digitalise cassettes but when I work out how to do so I'll share them with you.

The only other music I acquired while in Spain was an album by Los Chunguitos, a rumba band who have been around since the 1970s. On this album - 2004's "Abre Tu Corazon" - they have roped in various guest artists, presumably to make their sound more contemporary. On the whole it works pretty well, and here are two tracks from the album: "Dame De Beber" (featuring Danza Invisible) and "El Mundo Tras El Cristal" (featuring LaGuardia).

And here are the lads in their pomp. There is some fantastic hair in this clip.