I've got more of the Tsonga stuff than I realised. I went onto Google to try to find out more about today's featured act, Gezane Thomas Mzamani, and discovered that he (or they) had been nominated in the Best Tsonga album category of the South African Music Awards for his (or their) latest album.

The CD I picked up in Cape Town recently came out in 2007 and goes by the catchy title "Tribute to Freddy Matshwa Bemuda: Rifu Avaleli". Here is the cover: 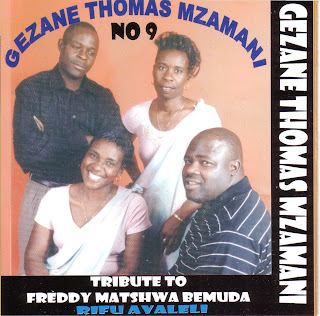 All the songs were composed by Gezane Thomas Shuma, who is presumably either the big lad bottom right or the moody feller top left. I'm not sure whether the Mzamani refers just to him or to the whole ensemble, including the two lovely ladies.

They seem to be from the more traditional wing of the Tsonga scene. Generally I prefer the Tsonga Disco, but I like this next track. It goes along on its merry traditional way until about 1:15 in, when suddenly someone doing a slightly dodgy Nelson Mandela impersonation appears to tell Zuma and Mbeki to get their act together. As a rallying cry it obviously wasn't a great success, but it is jolly enough.

Here is some more Mandela-based South African music for your entertainment. Mr Hugh Masekela and friends.